My Native Land A4 by Ana Blandiana 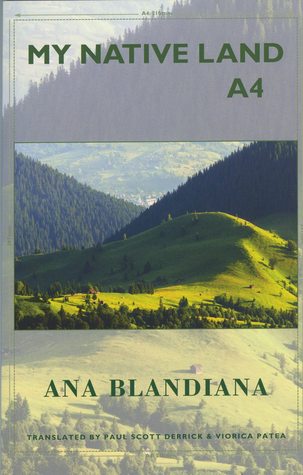 Readers coming belatedly to the work of Ana Blandiana may be puzzled at the disconnect between the introduction provided by her translators and the poems in this volume. It is true, as translators Paul Scott Derrick and Viorica Pâtea say, that Blandiana was one of the leading Romanian dissidents against the Communist regime, and thereafter was a strong voice for democratic principles (see WLT, Nov. 2014, 38–39). But the poems that deal at all with freedom do so in ways which are philosophical rather than political, putting the speaker and by extension all humanity in spaces that are enclosed, with no or illusory exits.

The poems often use a religious vocabulary: angels, gods, churches, and more abstract terms like guilt, innocence, faith. Occasionally the speaker challenges God, or a god; more often that voice addresses the simultaneous innocence and guilt of humans fixed in a situation they can try to understand but cannot hope to alter in what, in one poem, Blandiana calls “the country of unease.”

That applies not just to physical and metaphysical situations but to language, for in “Amber” the poet is “Like a dragonfly trapped in an amber cell— / This luminous crypt of words.” This and other poems support the generalizations in Blandiana’s manifesto in the afterword, where she says that striving for perfection is inevitable but inevitably doomed.

Elsewhere in the afterword, Blandiana calls for “a poetry so simple, clean, and transparent that it doesn’t even seem to be there.” That helps to account for the style of these poems, where declarative sentences in a vocabulary that is not quite limited to abstract and general terms cohere into a series of assertions. Some of these, as in “Group Portrait,” seem to assert conclusions that the rest of the poem either does not support or hammers too hard, rather like the concluding couplet of a Shakespearean sonnet. But such is the risk which this kind of poetry, sparer than that of Thomas Hardy and others, seems not only willing but destined to take.

Given the difficulty of dealing with this deceptively simple poetry, the translators may be excused for stressing Blandiana’s obviously distinguished career as a dissident. Another problem, not only in discussing Blandiana but all writers who have survived Communist and other types of oppression, is discovering what to say about their work when a particular form of oppression has ended. This may sound like a variation on “What have you done for us lately?” In fact, what Blandiana and many others have done is to move beyond old themes into new country, however much that might confuse readers of their older work.