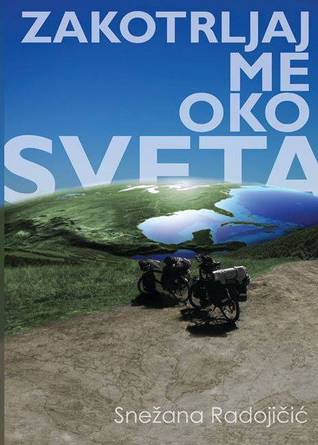 In Serbia, Snežana Radojičić is not an unknown author. For her first book, the short novel Dok su duše lutale (1994), she was awarded a reputable national prize, Matica srpska, and for her second book of stories, LP–lične priče (2005), she also received good reviews. But her third book, Zakotrljaj me oko sveta (Roll me around the world), has gained a far wider readership in Serbia as well as in the region. The reason lay in the fact of her unusual achievement. In 2011, after fifteen years of dissatisfaction with her job and life, Radojičić started traveling around the world by bike. She wanted to live her dream: to be a writer and to live free.

Zakotrljaj me oko sveta is a mixture of travel novel, diary, blog, and memoir. The author describes her travel adventure through ten European countries, which lasted half a year. At the beginning, she was afraid to travel all alone, so she posted an email invitation at crazyguyonabike.com. Bryan Keith from Colorado decided to join her. Their love story began in virtual reality by writing emails and talking on Skype. The passion grew, together with the bold undertaking, and they started the grand tour in July 2011 in Slovakia and continued through Poland, Ukraine, Romania, Serbia, Bosnia and Herzegovina, Croatia, Montenegro, Albania, Greece, and Turkey, where they split at the beginning of 2012. While Keith decided to settle there, Radojičić continued to travel alone. The book ends with her finding the courage to fulfill her dreams.

Thus far Radojičić has traveled thirty thousand kilometers (more than eighteen thousand miles) through thirty countries and finished the book in South Asia, in Nepal. Knowing this, we may assume that Zakotrljaj me oko sveta is only the first part of Radojičić’s travel writings. Although there are some weak parts—for example, repetitive elements in describing conflicts in the couple’s relationship—all in all it is an interesting book. As stated by the author, the reader will not find much about the facts and sights of the countries since they exist in guidebooks for travelers. Radojičić writes about survival basics of a biker’s life instead, filling the story with compelling details. During a global financial crisis, it is a comforting fact that people with no money can find a new life by walking through the world, as shown by Radojičić’s report of a group of Pakistani refugees in Greece.

What may impress readers are the pages about kind-hearted people from around the world. In every country, the couple was welcomed by people who wanted to learn where the bikers came from and where they were heading to, never watching them through the eyes of the official political arena and generously offering food or accommodation. Snežana Radojičić sends her readers messages of love, nature, and friendship, reminding us that intensity of life can be found by moving through it, by changing sights and challenging our perceptions, and most of all by communicating with others.