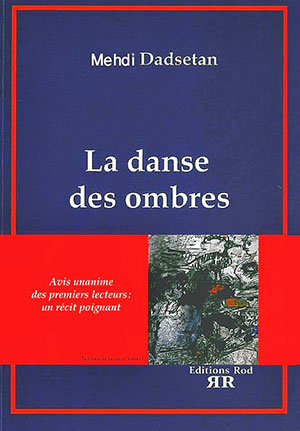 Mehdi Dadsetan’s semi-autobiographical second novel, La danse des ombres (The dance of shadows), tells the story of Saïd, an Iranian political refugee living in France after his imprisonment and torture under the Shah’s secret police in the 1970s. One of a small but prolific group of Iranian expatriates writing in French, Dadsetan offers a blistering indictment of the governments of both pre- and postrevolutionary Iran as Saïd’s youthful idealism gives way to a profound cynicism concerning the possibility of substantive political change. A former doctor, Saïd now works as a night watchman in a parking garage. The physical and physiological torment he suffered in Iran continues to haunt him. Deeply depressed, he checks into a hotel in a small French town to plan his suicide.

Dadsetan’s descriptions of his protagonist’s experience in prison are the most devastating of the novel. In simple and lucid prose, he describes the sadism of Saïd’s torturers and prison guards, preceded by farcical interrogations in which he is ordered to confess to purely invented crimes. A sensitive and thoughtful person with only vaguely defined revolutionary ambitions, Saïd struggles to understand the source of his captors’ inhumanity. “Why does he take so much pleasure in harming me? . . . And if I became his jailer? Can power transform us so much?” Indeed, it is the brutal system that permits and encourages such heinous crimes, rather than the individuals implicated within, that Dadsetan indicts most strongly. He even notes how a certain fellowship gradually develops between the prisoners and the guards as they begin laughing together and swapping stories during certain moments of calm.

Struggling to rebuild his life after leaving prison, Saïd eventually runs afoul of the postrevolutionary Islamist government and must flee to France, where the majority of the novel takes place. The effects of his imprisonment, as well as the alienation he feels in France, lead him to contemplate suicide. Having taken an overdose of sleeping pills, he lies alone in his hotel room, fantasizing about an encounter with a mysterious Swiss woman who offers him a fleeting night of romance and emotional connection before abandoning him to his fate. The novel’s ambiguous ending suggests the protagonist’s death, saying that “sleep took him away” as he tries in vain to formulate his last words.

La danse des ombres has a particular resonance in this present moment as the Muslim world considers the ambiguous aftereffects of the Arab spring and as the conflicts in Syria and Iraq continue to threaten regional stability. The Iranian case, in which the hope occasioned by the Shah’s long-awaited departure gave way to profound disappointment with the new Islamist government, is an especially important cautionary tale. Through the thoughtful and well-developed character of Saïd, who as a young man did not grasp the long-term consequences of his naïvely idealistic political activism, Dadsetan shows with great compassion the permanent effects of state-sponsored violence on its victims.