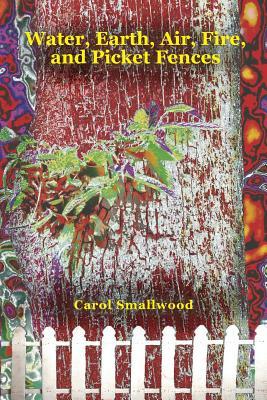 Whether in free verse or in her formal poems, Carol Smallwood presents a reflective tone for the greater part of this intriguing new collection of eighty-five poems. Most of her playful poems, written about commonplace objects, present themselves as simple vignettes but are as delightful as those of more serious tone. The topics speak for themselves, as in chalk words on campus sidewalks being treated democratically by wind and rain and shoes and time. And poems about such things as McDonald’s napkins being properly folded, or someone whimsically trying to catch the moment refraction occurs when a stick is dipped into a glass. These poems are simply fun to read.

Many poems are not about the elements, suggested in the volume’s title, but nevertheless belong rightly to the selected subdivision. Where else but under “fire” would one place this poem: “The Swan Nebula / is where new stars / constantly burst / in violent red birth / This fiery cradle / is surely where / we’ll return.” The poem carries us far and wide and allows us our nebulous dreams. In another, the train whistle “carried Augustine and Wittgenstein completely out of town.” Where but under “picket fences” (Smallwood’s catch-all section) would one place the pantoum about the doll, the one that survived through all the years, or the verse about crochet-bordered sheets that “lend / dignity / sleeping / horizontally”?

In “Tea Bubbles,” we find the poet playing with random observation and thought: “I lift the Styrofoam cup like mulled wine / Or in adoration of the Holy Grail— / Once the lid’s off you see bubbles align.” This villanelle concludes, “The hot water dots shape no evident design.”

By contrast to these lighter poems, we find Smallwood’s revelation of her bout with cancer heartrending. Especially so when we read “A Counseling Session,” “A Chemo Visit,” and “The Second MRI.” Experiencing these poems, we begin to understand the poet’s playfulness. We sense, as if from the poet’s viewpoint, that things will be what they will be, that there is yet time for enjoyment, time for reflection about great and small things. Realizing this brings a cohesion to the volume that I didn’t at first foresee.

My slight quibble with the collection concerns the poet’s inclusion of one or two of her pantoums that seem to gallop forward with “rhyme” but lack enough “reason” to justify. One such was “Before I Have to Go Home,” but “Mainsprings” carried a realistic and worthy message and used purposeful rhyming. Give me, rather, Smallwood’s nature poem: “Cumulus clouds fly the sky today: / queens of optimism, / delight of dreamers.” For I’m one who, in reading poetry, likes to dream a little.