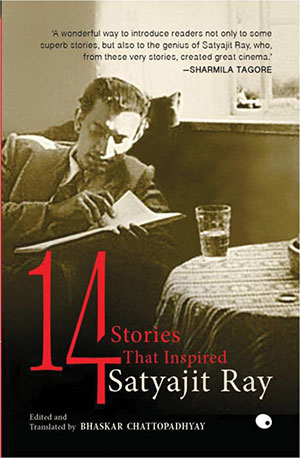 For this book, Bhaskar Chattopadhyay, a Bangalore-based statistician turned online art dealer, selected and translated fourteen stories that inspired eleven of Ray’s films. (The remaining nineteen are based on a dozen Bengali novels, a novella, the already-mentioned Ibsen play, and original screenplays.) The result is an intelligent and highly enjoyable collection whose value and effectiveness are obvious and twofold. On the one hand, it prompts the reader to watch the films (or to watch them again, he or she being most likely a Ray fan) and to read more works by the authors showcased, who are all major figures in Bengali literary modernism. On the other hand, the student of Ray’s cinema will further enjoy the opportunity to analyze his choice of literary sources (wondering, for example, about the conspicuous absence of such a major figure as Buddhadeva Bose) and the complex and fascinating ways in which he reworked and interpreted them to suit his own artistic purposes and vision. Interestingly enough, the fourteen stories represent different genres (children’s literature, social realism, historical fiction, satire, etc.) and periods (from the late nineteenth to the mid-twentieth century), but they all have, in different ways and degrees, a distinct visual and dramatic potential, which Ray exploited and enhanced by means of accomplished screenplays, compelling camerawork, and masterful directing.

A translator’s note, four brief pieces on or by Bengali actors who worked with Ray (Chhabi Biswas, Sharmila Tagore, and Dhritiman Chaterji), and an interview with the CEO of the Satyajit Ray Society complete the volume. All somewhat relevant, although not enough to dispel the impression of their filling in for more appropriate and substantial content, such as an introduction or basic bibliographic information—let alone a sample of Ray’s adaptations of one or more of the stories featured.