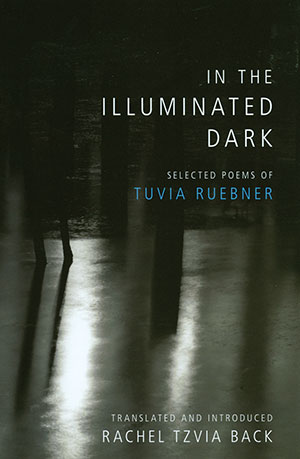 There is reason to celebrate the publication of this scholarly undertaking. I value the range of Tuvia Ruebner’s selected poems, the wisdom of Rachel Tzvia Back’s translator’s preface, her far-reaching introduction to Ruebner’s biography and poetics, and her indispensable endnotes. In the Illuminated Dark immortalizes the work of a major Hebrew poet of the Holocaust generation. I share in the applause for this culturally significant achievement.

The integrity of Back’s texts in the latter portion of the book, including the ekphrastic poems, overrode my habit of comparing facing pages of originals and translations. Back’s translations from the fifth decade of Ruebner’s career (“Postcards From”) pinpoint an English register that does justice to Ruebner. Here, her translations transmit the enormity and subtlety of the Hebrew poems slyly clothed in a mundane genre combining visual imagery and language. She sustains a discursive cadence that supports the outcry of the poems as well as intimations of irony, decay, and the perpetual ache of the loss overtly illuminated in Ruebner’s early poetry.

Even though I acknowledge the danger of bilingual presentations and recognize translations as stand-alone poems, as does Back, in the book’s opening pages I found my eye straying to the left, away from the English. My focus wavered despite the magnitude of Ruebner’s poetry when I encountered disharmonious choices. The words “abeyance” (“house of abeyance”) in the first poem, “Testimony,” and “enslumbering” in “Oblivion,” for example, disrupted the “new music” Back desires, inviting comparison to the transparency of the Hebrew in these more minimal lyric poems.

Back’s recognition of the centrality of form for Ruebner, whether symmetrical or fragmented, is sometimes not honored. In “Among These Mountains,” for example, melodious alliteration in the translation does not adequately echo the sound patterning of the original poem—so central to its effect. Unsupported by the more fully realized, songlike structure of the source poem, the single closing couplet in English trivializes. In the seminal “My Little Sister,” rendering the Hebrew’s childish singsong might have further intensified the poem’s poignancy. Back’s effort to simulate the design of stanza six of “The Tower of Babel (3)” illustrates this aspect of the challenge of translating Ruebner. Closing the blessing/mini-incantation with a rhymed couplet falls short of the impact of the original’s repetitions. While the economy and peculiar euphony of Hebrew may be out of reach, I found it hard to justify the introduction of the word “enrapture” (“and eyes to enrapture light”) in the stanza’s concluding line. These comments point to possibilities for further heightening meaning and minimizing disruptions to an invaluable poetic experience.

Overall, beyond my thoughts above, thanks to Rachel Tzvia Back’s remarkable achievement, this collection is a great celebration of Israeli poet Tuvia Ruebner’s work.