Snow and Shadow by Dorothy Tse 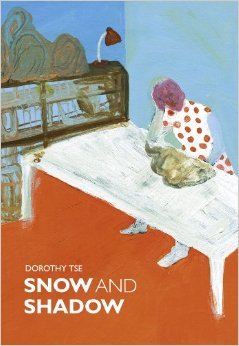 Dorothy Tse’s collection of short stories transports the reader through a series of shocks and revelations into a complex realm pendulating between the known, the obscure, and the horrific. Many of the stories seem to twist together several layers of both temporal and spatial dimensions. The reader is lost and confused, sliding between the surreal and grotesque. There is no thread connecting us to the emotive response. Even so, the characters seem ready to withstand whatever comes their way; they are out of compass guidance yet not out of flexibility.

In “Woman Fish,” the feminine character undergoes a Kafkaesque metamorphosis. The husband witnesses his wife’s transformation into a fish and seems to make the necessary changes to accept their new relationship until delivering her to the river. A similar dual tension can be found in “Leaf and Knife,” where a couple’s coordinated dance steps turn into an amputation contest. In all of Tse’s stories, there is always the possibility of global destruction as death breaks into our dimension: “the overcast sky opened its toothless mouth, spattering faces with rain.”

Another common theme in Tse’s writing is confused states of mind, the constant shift between reality and dreamlike states. Several stories refer to the subconscious world of dreaming. In “Black Cat City,” people are slaves of their own imagination. The characters named Recall and Memoria seem to get either closer or separated, based on what they remember or forget about their life together; they experience revelations of the absurd and a disintegration of their conscience. The same disorientation brings characters to states of imprisonment. In “Bed,” a girl leaves her small house in search of a place to rest; eventually, somebody takes advantage of her primordial need for sleep and takes away her virginity. Yet, separating two worlds, the bed becomes the point of transformation from a temporary resting place of sleep into death and entering the cycle of life.

One constant theme linking many of Tse’s short stories is the shifting of identity in the family circle. In both “Head” and “Snow and Shadow,” we can hardly keep up with changes in character identity, the cyclical reuse of their names, and their symbolic resemblance in actions or appearance to other family members. “Snow and Shadow” stands apart mainly through its rhythm, which resembles a fairy tale with allegorical strata. It is somewhat centered on the royal marriage between Shadow and J., but it evolves into a game of confusions generated by characters sharing the same name. There is a constant tension between glimpses of the characters’ horrific actions and strange apparitions: the ghost of Shadow’s mother combing her hair in the mirror. The narrative line constantly shifts around the real and the strange.