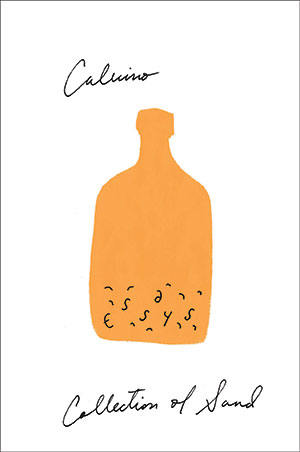 North American readers are familiar with the work of Italo Calvino primarily because of his fiction. Whether it’s his “fantasy” books, The Cloven Viscount and The Nonexistent Knight, or his more postmodern texts, Invisible Cities, If on a Winter’s Night a Traveler, or Mr. Palomar, Calvino’s extraordinary fictional output has made him popular with the general public, critics, and countless authors who consider him an inspiration. However, much of Calvino’s work, particularly his nonfiction, has not been translated into English. This is troubling but not surprising since we read only a small number of books in translation in the United States. Now, however, Mariner Books, an imprint of Houghton Mifflin Harcourt, plans on translating at least five of Calvino’s previously untranslated texts into English. The first is a book of essays titled Collection of Sand.

Collezione di sabbia was first published in Italy in 1984, a year before Calvino’s death. The collection of essays constitutes a major contribution to Calvino’s nonfictional oeuvre. Martin McLaughlin’s English translation is a major achievement and a cause for celebration. Here we have Calvino at his most omnivorous, his most curious, and his most intellectually piercing. In fact, reading through Collection of Sand, it is often difficult remembering that we are reading a novelist and not an art critic or travel writer. Calvino is able to balance his own observations and his voice so as not to dominate the scenes he is writing about. He is able to slip seamlessly into the background and allow the subject matter to emerge more fully. This self-confidence is the mark of a true master, of someone who is as comfortable in the empirical world as he is in the literary world.

Collection of Sand is divided into four sections: “Exhibitions—Explorations,” which examines various art exhibitions and installations; “The Eye’s Ray,” exploring perception; “Accounts of the Fantastic,” in which a series of imaginary geographies and mechanisms are contemplated; and, finally, “The Shape of Time,” detailing Calvino’s travels through Japan, Mexico, and Iran. (These constitute the earliest pieces in the collection, dating from the 1970s; all the other essays were written in the early 1980s.) Each section reads like its own collection within a larger collection. In fact, the reader can interpret the text to be Calvino’s own literary version of an exhibit that showcases his encounters with the familiar, strange, and remote. What is ultimately revealed through our journey with Calvino is the author himself, for everything in the collection is of some interest to him.

Collection of Sand is less fantastic than Calvino’s fiction, but here we get an essential collection of essays and travel writing that allows us entry into the mind of the author in ways that his fiction does not. Mariner has commissioned celebrated Knopf art director Peter Mendelsund for this cover as well as a host of other new Calvino covers scheduled to be published. Most disappointing, however, is that Mariner has released these Calvino texts in paperback only.