The Confessions of a Number One Son: The Great Chinese American Novel by Frank Chin 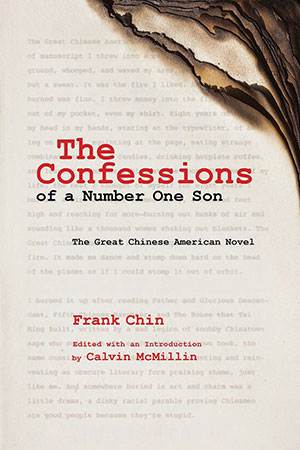 As Calvin McMillin notes, and as longtime readers of Frank Chin’s work will realize, The Confessions of a Number One Son: The Great Chinese American Novel includes characters, episodes, and cultural references, most of them pop, that have appeared in plays, fiction, and essays, for to quote Chin, “It’s all part of the same kit.” McMillin has done a commendable job in assembling, from various scattered drafts of Chin’s novel, abandoned about four decades ago, a typescript of 662 pages and then cutting material used in later stories and novels to result in the version now published.

The novel gives a fairly early look at Chin’s obsession with Charlie Chan as played, in Hollywood, by white actors. Here, the last white Charlie Chan, who really wanted to be Sabu, has fled to Hawai`i from what he thinks are vengeful Chinese assassins, notably Golford Tam Lum, himself fleeing from a failed marriage and a failed attempt at a novel, which, he realizes, is just like all the Chinatown novels he despises.

Tam Lum has an affair with Chan’s daughter, a fortyish ex-nun, whom he impregnates, and helps her father get plastic surgery so that he can win a Golden Gloves tournament and move on to succeed Sabu. Meanwhile, Chan helps stage Tam Lum’s play, which has more than an incidental resemblance to Chin’s The Year of the Dragon. The two rituals, in ring and on stage, bring the characters together in what seems like uneasy harmony, and the central character is left, as always for Chin, unmoored, uncertain, and basically alone.

In broader terms, what does the novel tell us about the arc of Chin’s career? First, that his work is fueled by pain and by anger. Here the first dominates, as it does in much of his fiction and drama, while the second is more notable in his essays and polemics. Second, that when the novel was written, his style was more flamboyant, as in “The shimmying flames [from his burned manuscript] sucked up and sneezed winds that slapped me around and made me squint to see through dust, weeds, and small rocks flying at my face. Twang Slanty, El Chino, rides again.” As the narrator says near the end of the book, “I talk it loud and try to make it move along because I like things to keep moving, even if all I can move along is thoughts.”

Through decades of adversity, aborted manuscripts, and controversies that have alienated many readers in the white, Chinese American, and Japanese American communities, Chin has continued to produce, and observe, “The Movie about Me,” which after seventy-five years shows no sign of ending.