The Tower of the Antilles by Achy Obejas 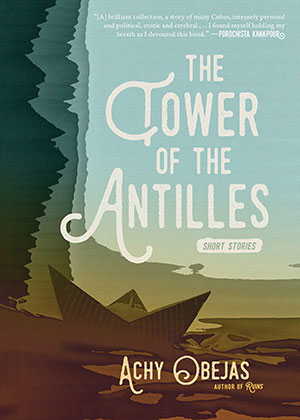 Achy Obejas’s new book, The Tower of the Antilles, amply fulfills the promise of the author’s earlier work. These stories are about borders—physical and emotional, geographical and linguistic—and about the symbols of borders: passports, visas, pain disguised in absurdity.

Her protagonists are from an island where the greatest achievement, as Obejas says in one of the stories, is leaving. One threatens suicide, the ultimate act of departure. Another collects boats that have been cast adrift and displays them in his neighborhood. For another, the strange twists of a relationship embody every sort of border.

In “Kimberle,” the author deftly mixes three-partner sex with prized cellophane-wrapped first editions that go missing mysteriously. A young woman who threatens suicide is taken in by the protagonist, who works in a smokehouse. A serial murderer is on the loose. The tale, like all in the collection, unfolds in perfect sync.

In another story, there are lovers, ex-lovers, and lots of sounds: a radiator hissing, a mob shouting, a teapot whistling, the drone of the television, the zzzzz of a zipper, the buzz of a fly, traffic noises, doors opening and shutting, things rustling, people breathing. Sounds become language remembered. Some language is learned (wrong) in tedious English classes. “Whenever you hear a bell ring, anger turns on a swing” is recognized years later as “Whenever you hear a bell ring, an angel earns its wings.”

One story is entitled “Exile,” but all are about exile of one sort or another. And, although profoundly Cuban, they touch us all because displacement is a permanent feature of the late twentieth and early twenty-first centuries. It is the world we live in.

Obejas’s use of language is masterful and intimate, deeply felt and projected. One of the stories is translated by the author from the original Spanish. The others were written directly in English. All display a genius for saying just enough and never too much.

The Tower of the Antilles joins a rich store of in-between literature from Cubans over the past half-century, by both those who left and those who stayed. But it rises above this sea of work, claiming a place that is generally less politically wrought, instead depending for its power on a rich unfolding and unexpected tensions. I highly recommend this collection.