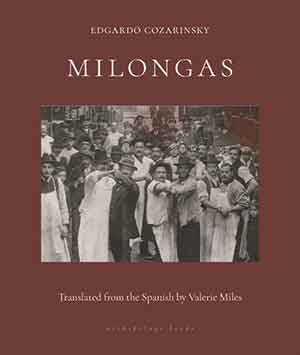 BIRTHED IN THE brothels of Buenos Aires, and now heralded as emblematic of Argentine culture, the tango evolved from a fusion of the candomblé music from African slaves and music from European immigrants fleeing desperate conditions. The tango is part of the musical genre known as milonga. The milonga is also a dance in and of itself—similar to the tango but fast-paced with precise steps.

Although documented by Jorge Luis Borges in his essay “History of the Tango,” the origin stories are uncertain, as is the evolution of the milonga genre. Argentine writer and filmmaker Edgardo Cozarinsky traces its fascinating journey through time and the seedy brothels and rough Argentine and European bars where the dance could be quite mannered or could spark with theatrical violence. The dance grew particularly rapidly in rough immigrant communities with shortages of women, and with thrill-seeking elites. Cozarinsky has a unique vantage point, having lived in both Buenos Aires and Paris for many years, where he researched archives and interviewed people who had experience with the development of the many variants of the tango.

With the tango’s origins in Buenos Aires, where class inequality was extreme, members of the wealthy elites took transgressive pleasure in witnessing provocative dances and even knife fights. Borges and others described the sensation-seeking behavior as they expressed disappointment in seeing only the dances and not the knife fights. The milonga quickly spread to Paris and other capitals of Europe that also had a rigid social hierarchy of sensation-seeking elites with money. The tawdry thrill of the brothel was maximized in a world with a rigid social hierarchy and a rigid code of morality for women.

Cozarinsky describes how difficult it was to obtain reliable accounts of the rise of the tango in the years preceding World War I. He explains that even printed accounts contained exaggerations, omissions, deliberately misleading identities. The motive may have been to protect the reputations of the participants, but more likely: the more lurid, the more coveted the experience.

However, with too much embroidering of what was largely considered the dance of sex workers, the choreography of the brothel, resulting in a pornographic spectacle, could have unintended consequences. The tango was banned in certain places, and supposedly even Pope Pius X considered a ban. In the chapter “Dubious Testimony,” several events that never actually occurred fed the flames of curiosity and popularity of the dance. One involved a supposed performance of the tango at the Vatican, to which Pope Pius X supposedly urged the reintroduction of the furlana, an Italian folk dance popular with peasants at grape harvest time. The supposed suggestion was met with hilarity and widely parodied in the tango bars.

Cozarinsky takes us through the ebbs and flows of the popularity of the tango, and also through a number of its evolutionary adaptive speciations, ranging from its gentrification when Perón legitimized it during the 1950s to a later decline as it lost its edginess. Later, the tango found a resurgence in the proliferation of new varieties and the rising popularity in the early 2000s of “gay tango.”

The original version of this book was published in Spanish in 2007. It would be very interesting to know what Cozarinsky thinks of the future of the tango now. Undoubtedly, with Covid, it has both gone underground and regained its reputation for bringing people into dangerous territories. At the same time, it will likely continue to be appropriated for tourist spectacles, high-art modern dance performances, and a fun and enjoyable road to fitness via exercise classes and videos.