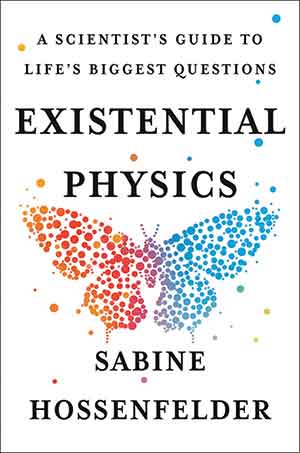 “TRUTH” AND HOW we find it has never been an easy topic. If anything, the past decade has scattered any hope that the twentieth century’s stellar rise of modern science imbued us with a lasting, mutual understanding of how we agree on truth. Each one of us might cast blame for this failure differently—be it on the far right or left, be it on mainstream or social media. Probably few of us, however, would think of faulting scientists.

In her 2018 book Lost in Math, German physicist Sabine Hossenfelder criticized researchers in the foundations of physics for their “use of unscientific methods.” In her new book, Existential Physics, she now points out that “some of the research they pursue isn’t scientific to begin with.” I briefly met Hossenfelder at a conference in Mexico about fifteen years ago. Little did I know then that this somewhat introverted postdoc would rise to become one of fundamental physics’ most prominent communicators as well as one of its starkest critics.

Yet Existential Physics goes beyond simply criticizing a certain fraction of the scientific community. It seems more inspired by her work as a public intellectual than born out of discussions taking place between different schools of scientific thought, as her first book arguably was. Each chapter targets one of nine questions that, not accidentally, resemble the type of questions Hossenfelder engages with on her blog and YouTube channel. With titles like “Are you just a bag of atoms?”; “Has physics ruled out free will?”; and “Was the universe made for us?” the chapters aim to lay out how far physics narrows down the possible answers to these questions.

Hossenfelder is forthright about being “both agnostic and a heathen” but tolerant of other beliefs, provided “your search for meaning respects scientific fact.” Helping the reader discern established science from belief is her principal objective in Existential Physics. For each of her chapters’ leading questions, she draws a clear demarcation between the two. This requires her to introduce the main ideas of many of modern physics’ fundamental theories, which are delivered with the necessary rigor but are never dry, never lacking Hossenfelder’s characteristic humor. The latter comes across often when discussing ideas she finds unscientific: “if you want consciousness to be physical ‘stuff,’ then you’ll have to explain how its physics works. You can’t have your cake and eat it too.”

The problem Hossenfelder sees in some scientists muddying the waters between established science and fiction, written in the language of mathematics, is that the public will not necessarily understand that this is what is happening. One scientist talking about the multiverse with the same authority and gravitas as another talks about anthropogenic climate change and virus reproduction numbers is potentially dangerous. Hossenfelder does not mean to suggest string theorists are the principal reason that too many seek “their own truth” rather than simply “the truth.” Still, and particularly in the current environment, scientists must hold themselves and each other to exceptionally high levels of rigor and clarity in communicating with the wider public.

Existential Physics further establishes its author as a beacon of clarity and sanity. It leads a path through what may sometimes appear a confusing thicket of parallel universes and quantum healing, separating the wheat from the chaff. Any reader curious to learn what fundamental physics can contribute to answering the most fundamental questions of our ontology will find Hossenfelder’s second book an invaluable resource.