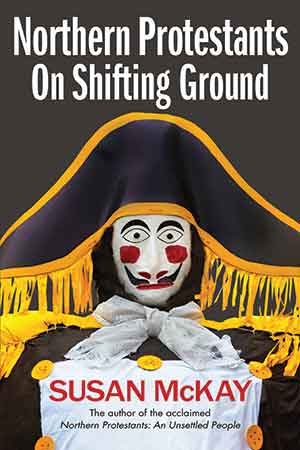 WAR PHOTOGRAPHER Robert Capa famously said, “If your pictures aren’t good enough, you aren’t close enough.” The outstanding quality of the word-pictures drawn in Northern Protestants: On Shifting Ground relies on the author’s practice of getting close enough to people to see the detail of their lives, rather than presenting us with distant generalizations. But proximity alone would not guarantee a book of this caliber. For that, you also need the author’s skill as an empathic listener and lucid writer. Susan McKay expertly coaxes a variety of voices to tell their stories and presents these to readers with impressive clarity.

The book is based on interviews conducted between 2019 and 2021. McKay traveled all over Northern Ireland to take soundings from one sector of the country’s populace. She wanted to get a sense of how Protestants think of themselves and what they want, in the context of a milieu where old allegiances have been strained by the legacy of the Troubles, Brexit, the pandemic, renewed worries about a possible united Ireland, and loss of faith in politicians caused by the Renewable Heat Incentive scandal.

(The Renewable Heat Incentive scandal was a shockingly mismanaged green-energy scheme that lost a colossal amount of public money and ultimately led to the collapse of the Northern Ireland Assembly—the devolved legislature for Northern Ireland. An account of what happened—uncovering political and administrative incompetence and duplicity on a scale that’s hard to credit—is given in Sam McBride’s masterpiece of investigative journalism, Burned: The Inside Story of the “Cash-for-Ash” Scandal and Northern Ireland’s Secretive New Elite [2019].)

Northern Protestants shows the poverty of those simplifying stereotypes that are too often the currency of media reports. Commentators who lack McKay’s skills, and her intrepid determination to seek out enlightening face-to-face encounters, tend to present Northern Ireland in crudely dualistic terms: Protestant-Unionist-Loyalist versus Catholic-Nationalist-Republican. The impression given is that within each tribal bloc there is an obdurate uniformity of opinion. McKay repeatedly demonstrates how fatuous such a picture is. “Northern Protestant” is far from being a homogeneous singularity. Thinking within this group is neither fixed nor predictable. Her book, together with its older sibling, Northern Protestants: An Unsettled People (published in 2000, with a new edition brought out last year to coincide with the second volume’s appearance), provides a sensitive mapping of how Protestant mind-sets have changed, and responded to change, over the last several decades. The books compile a record of the raw oral literature of the moment.

Susan McKay offers an always sympathetic, often surprising, but not uncritical portrait of her people. The books have more than local relevance. Reading them at this juncture in European history gives a particular edge to her insights about the impact of violence. She talks to many survivors, relatives, and descendants of those killed and maimed in Ulster’s thirty years of sectarian conflict. Long after the immediate lethality of terrorist bombings and shootings, lives are still disfigured by these acts of savagery.

Over 3,500 people lost their lives in Northern Ireland’s Troubles. This is a tiny number compared to casualties in Ukraine. It is terrible to think how far into the future this war will cast its blighting shadows. As millions of distraught, displaced, bereaved, and injured people struggle to pick up the pieces of their lives, one hopes that those who listen to, record, and tell their stories will be as skillful in this art as Susan McKay is. She provides a master class in how to listen and has a fine sense of when to put people’s own words on the page, when to paraphrase, what is best juxtaposed with what, when the author herself needs to comment and when to stand back. As a result, readers receive a powerful sense of the variety of ways, some admirable, some decidedly not, in which individuals cope—or fail to cope—with challenging, often desperate circumstances. We are given a precise and intimate glimpse of how a particular group has followed a range of strategies to maintain a sense of identity as its people variously try to navigate the shifting ground on which they find themselves.