The Land of Short Sentences by Stine Pilgaard 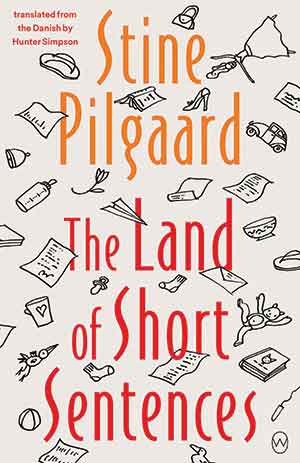 STINE PILGAARD’S SLIM novel digs into the psyche of a young woman who finds herself displaced into a remote corner of her native Denmark where her boyfriend has landed a teaching position. Pilgaard’s narrator shares with us how painful life can be if cast into an environment where conversation with your new neighbors “should be on unremarkable details,” features “the situational before the personal,” and, by all means, eschews anything related to “reproduction.” As a neighbor counsels her, “if you stay silent for long enough then eventually they’ll start to talk.”

But then again, the writer isn’t really motivated by a desire to parse the unforgiving reticence that covers the Danish provinces under a blanket of silence from which only a few “short sentences” occasionally will escape. Instead, she ponders how such provincial surroundings may mute the voice and ambitions of the young outsider, the mother of an infant who faces the difficult lot of the young woman whose every minute is consumed by mundane tasks, isolation, and the absence of any goals in reach besides getting through to the end of yet another endless seeming week of childcare.

Pilgaard knows that this story has been written many times before and has accepted the challenge to add to this subgenre a take that indeed is a bit harder to find. To be sure, she rejects any temptation to tilt her story toward the famed “awakening” in which writers since Kate Chopin have questioned the wifely allegiance to husband and child. There is none of the ideological education that characterized Doris Lessing’s depiction of young mothers, and no allusion to racial denigration that shocked us in Toni Morrison’s stories about Black motherhood. Likewise, the author refuses to drown her protagonist in the silent despondency that marked the narratives of feminist chroniclers of motherhood or to elevate her to the brilliant and self-sufficient heights of the independent mothers conceived by Elena Ferrante.

Pilgaard outwits the at-times painful descriptions of the quotidian banality that erases anything joyful in the life of the “trailing spouse” by equipping her with a sarcasm and acerbity that does not engender the reader’s empathy with the pathetic situation of the young woman. The author goes to great lengths to furnish her with a voice that annoys even the readers of the advice column in which the young narrator shares her unconventional look at human relations. She counsels one of the letter writers seeking advice from her: “Don’t ask yourself who you want to marry, ask who you want to divorce.” Realizing how the narrator outdoes herself in responding with bile to any articulations of sentiment or sentimentality is one of the few dynamics of this short novel that may keep us as readers involved—aside from the question of whether she will indeed pass the driver’s permit exam, which makes up another large part of the narrative.

Digging into the psyche of the thirtysomething, we see that she understands how deeply she is boxed into a life littered with wet wipes, dusty houseplants, the feeling of invisibility, and a vague infatuation with men out of her reach. As Pilgaard doesn’t permit us to sympathize with her protagonist, we become entirely detached spectators of an inconsequential account that voices in glib witticisms how flat the emotional landscape of Denmark is. The Land of Short Sentences handles what eventually may be of consequence in one short list: “A frightened panda with a mouthful of bamboo. The dissemination of the rainforest, endangered species, starving war refugees, battered women, . . . sad Muslims in need of a mosque.” With this quick swipe of a narrative wet wipe, all that messiness that one could write about is conveniently cleaned up.