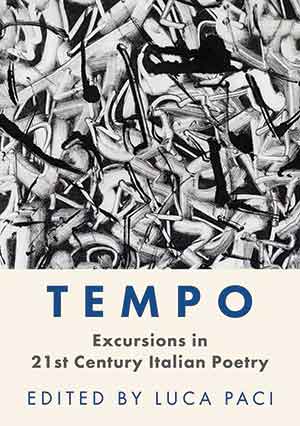 TEMPO: Excursions in 21st Century Italian Poetry is an excellent bilingual survey of current Italian poetry’s diversity and dynamism. Editor Luca Paci (co-director of the Italian Cultural Centre Wales) has selected 106 pieces by twenty-two poets (born between 1941 and 1994), most published since 2000, and translated by twenty-eight translators, most of whom are themselves poets. Tempo highlights three characteristics of Italian poetry today: unencumbered acknowledgment of the past; invention; and growing inclusiveness.

Unsurprisingly, Italy’s long and varied histories surface in many of the poems selected by Paci—but as points of departure or touchstones, not as anchors. Poems refer to Aeneas, the gods of antiquity, Varro, Galla Placidia, and the Mons Capitolinus, but also (sometimes in the same poem) to Juventus, Fiumicino Airport, the Bologna Massacre of 1980, Miami Vice, and the Dow Jones. Traditional modes and forms are represented without being taxidermied. For instance, poems by Milo De Angelis are models of elegiac lyricism, combining universals of grief and loss with specifics of Milan’s Lambrate neighborhood; the translations by Patrizio Ceccagnoli and Susan Stewart are models of balanced restraint. Patrizia Valduga writes sonnets that Geoffrey Brock renders with equivalent nerviness while replicating the rhyme scheme.

Tempo takes a wide view, including a poem in Sardinian by Antonella Anedda, translated by Jamie McKendrick, and poems by Fabio Franzin (translated by Cristina Viti) in Veneto-Treviso dialect. Shirin Ramzanali Fazel’s originally self-published poems are a highlight of the collection. She wrote them in English, interspersed with Somali and Arabic, and then translated them herself into Italian. However, Tempo would have benefited from an even wider view: only four of the poets selected were born south of Rome, and the anthology lacks poems focused on the Mezzogiorno, let alone in Sicilian or any of the southern dialects. Regardless, Paci has done a great service: Tempo will be a welcome addition to the bookshelves of anglophones whose knowledge of Italian poetry has not been updated beyond Ungaretti, Montale, Pasolini, and other giants of the last century.