Crown of Beaks by Erik Martiny 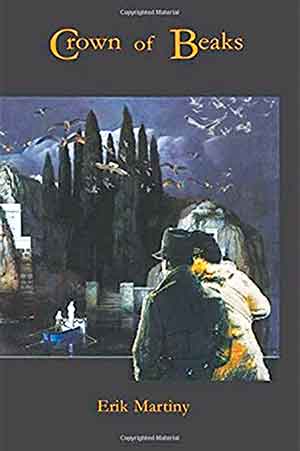 TO DISTINGUISH THEIR art from that of the crowds of writers publishing today, many authors wander off well-trodden paths to explore theoretically interesting tropes and structures, reshaping, for instance—as this novel does—traditional elements of the police procedural into something other than a police procedural, yet drawing on its popular attractions. Crown of Beaks begins like many crime novels with a horrifying suffocation murder (similar to those in Dick Francis’s Proof) written in the point of view of the victim. An Interpol detective, Stieg Molloy, is called in because of the peculiar circumstances. The body has been wrapped in duct tape, hanging in public at the Venice Biennale and presumed by passersby to be some sort of performance art or installation for several days until the local birds begin pecking at it. The birds’ buffet turns out to be a prominent artist with an odd toe tag. Why him? Why the gruesome theatrics? What can the medical examiner discover on the corpse? What about the artist’s wife?

The conventions of the detective novel have all been set up in an imaginative way, and Stieg Molloy is on the case. Though he is the hard-drinking lone wolf whose intense sexual attraction to women is the real mystery in many a paperback, he will inevitably be forced to work with an Italian partner, Paola Contini. The thought passes that the name “Stieg” for no particular reason might be a direct allusion to Stieg Larson, the late author of The Girl with the Dragon Tattoo, but so far, so good. The book is proceeding like this kind of book proceeds and is a bit above average in the way popular crime fiction does these setups.

But that’s not good enough, apparently, or the author gets bored with the conventions—which very well might be the case, as Crown of Beaks gets more bizarre as it continues incorporating elements from many styles of thrillers and other popular fiction. Paola has a target on her like most sidekicks. She will show her moxie early on by handling one thug and his animals, but later be caught by the bad guy, tortured, and require rescuing. The hero will get a thorough thrashing by the minions of the bad guy, who somehow fail to finish him off. The situation is so set up that it will require Stieg to forgo all of the resources presumably available to an Interpol investigator and to confront the bad guy alone.

There aren’t a lot of clever deductions or amazing clues in this kind of detective story anyway, but the bad guy here is revealed pretty easily and seems to be a combination of Drs. No and Moreau. He’s a mad scientist meddling with DNA as an art project. He has somehow built a man cave at the end of the world and amuses himself at one point by soaking a woman in honey so that she can be attacked by what are described to be similar to the “murder hornets” that recently thrilled newscasters. He’s sadistic enough and the incidents are horrible enough to remind the reader of Thomas Harris’s Hannibal. Civilization as we know it is at risk, but especially independent women.

Instead of simply telling the story and letting the story carry its own weight, many an author has fallen into the trap of trying too hard. Whether it is out of embarrassment for slumming in the lower literary forms or aiming to make the lower literary forms into higher or simply out of boredom with the limitations of the genres, certain missteps cry out, “Look! I am a serious literary author!” Crown of Beaks should be at least a third shorter. There are author’s notes periodically, à la Fielding, as if to remind the “gentle reader” that all this stuff is made up, but they serve little purpose here. There are lengthy conversations with a self-driving car that also provides research. In fact, a great deal of information is repeated, and there are lengthy chunks of dialogue that neither reveal character nor expose more information to advance the story. There is also the odd tic of regularly explaining the meaning of Italian words or expressions, as if to make sure the reader doesn’t forget the setting.

And most fundamental of all: one doesn’t have to write like Hemingway to exercise some restraint over one’s vocabulary. Many, many instances of trying too hard to impress do exactly the opposite. Erik Martiny has a vivid imagination and considerable talents, but they very much need to be reined in.