An Unlasting Home by Mai Al-Nakib 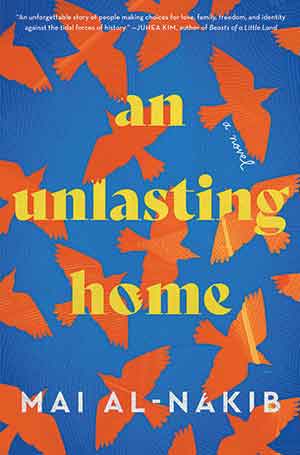 MAI AL-NAKIB’S debut novel, An Unlasting Home, circles around the complicated family legacy of her main character, Sara, an academic with Arab parentage, who grew up in Kuwait but was educated in American schools and universities. With her parents and grandparents dead, Sara returns to Kuwait to the family house, to reckon with her “bifurcated” identity. The title, An Unlasting Home, is taken from Joyce’s A Portrait of the Artist as a Young Man and refers to wanderers, like birds, who build nests, “an unlasting home under the eaves of men’s houses.” The book is an ambitious family epic with a historical sweep, an elegy to grandmothers and mothers who were forced from their original homes by personal or political circumstances in the Middle East to build nests elsewhere.

The novel opens with Sara’s dramatic arrest for blasphemy in Kuwait in the recent present (2013). Recorded by one of her students in niqab of saying, “God is dead,” she is arrested and taken away to jail, just like that: every teacher’s nightmare. Sara is a serious academic, determined to explain the ideas of Nietzsche, yet the girls she teaches are steeped in a conservative Islamic tradition. Education is not expected to be transformative. How unlike the Kuwait of the 1970s Sara knew, brought up by parents who sent her to American schools and encouraged her to be independent.

Part 1 rotates between Sara’s point of view, in the present, and her maternal and paternal grandmothers’ point of view in the 1920s and ’30s, both part of an Arab diaspora. Sara’s maternal grandmother, Lulwa, was born in Kuwait and married a pearl merchant. From a poor family of fisherman, Lulwa is married off at a very young age and moves to India with her husband in the 1920s. However, with “the changing winds of Indian independence,” the Al-Mustafas move back to Kuwait in the 1950s. The children, fluent in Hindi and English but with broken Arabic, feel displaced when they move to Kuwait. Her mother, Noura’s, alienation as a child is echoed in the life of her daughter.

Exploring the problems of those in diaspora, especially an Arab diaspora, is fresh territory—and gives one a sense of just how emotionally difficult it is to juggle more than one cultural identity and language. Al-Nakib’s novel is also structured in a way that reflects a more circular idea of time: “time in motion, in flux, [refuses] to persist along any given line, gliding out of the past into the present and the future.” Although the grandmothers and mothers are dead, their presence still “glides out of the past into the present.”

Sara’s paternal grandmother, Yasmine, also must reconcile a mixed cultural identity with a Turkish mother and a Lebanese father. When her father suddenly dies, the family is impoverished. She falls in love with a boy from a wealthy family, but the romance is squashed by his mother. Yasmine, who dreamed of going to the American University in Beirut, instead goes to Iraq to teach Arabic. On the rebound, she meets Marwan, the son of a “fervent nationalist” in Baghdad. In the struggle for independence from the Ottomans, the British considered him a “wild card.” His father was arrested and soon after died, from what appeared to be poison. Her Turkish mother, aware that her daughter feels under pressure to marry to save the impoverished family, is not enthusiastic about Marwan. Her hunch proves to be right as he insists Yasmine give up her career as a teacher. Unlike grandmother Lulwa, whose marriage was generally happy, grandmother Yasmine is tethered to a spoiled, selfish man who turns out to be a womanizer.

In part 2, the point of view rotates between Sara, her mother, Noura, and her Indian ayah, or nanny, Maria, a surrogate mother figure. Her mother, Noura, now dead, Sara is comforted by Maria as she faces the charges of blasphemy, but only briefly. In her eighties, Maria collapses and dies of heart failure. While not a blood relative, Maria takes care of Sara from a young age and in some ways is closer to Sara than her mother. Maria also tells her touching story: from a poor Christian family in Goa, she is forced to find work to support her children when her husband breaks his neck in a fall from a palm tree. A chance encounter with the Al-Mustafas in India brings her to Kuwait. She secures her children’s futures economically but is not present as they are growing up and pays the price emotionally. Eventually, with the help of the Al-Mustafas, she brings her children to Kuwait for better opportunities. But she, like Sara and many of the other characters in this novel, lives in the space between two cultural worlds.

Part 3 is told entirely from Sara’s point of view, and she flies alone, mourning the past and a Kuwait that no longer feels like home. This section of the novel is divided by past time, set in Kuwait and the United States, with 2013, focusing on the dangerous court case of blasphemy that she must face. From 1989 to 1992, she follows her brother to Berkeley. While at college, she learns of the tragic death of her father and uncle from her mother in a clipped, brief call on a satellite phone. A poignant scene in the novel is the description of the murder of her father, and his brother, as they are “accidentally” killed by overzealous Kuwaiti soldiers because of their Iraqi accents. Ironically, her father sacrificed a lucrative career to develop the national health system of Kuwait but is killed because he is considered “the enemy.” Their corpses were later recovered by the neighborhood resistance, who apologized for the “irreversible mistake.”

Political events and personal reminiscence are intertwined. On September 11, 2000, she remembers the invasion of Kuwait and the death of her mother, and she also learns that her first boyfriend, Nabil, died in the Twin Towers. In 2013 the blasphemy charge against her is eventually dropped when she recants, and she wonders “how Kuwait could have gone from bikinis at the Gazelle Club to niqabs in mosques in the space of a decade.” At last she comes to terms with her identity, acknowledging: “In Kuwait, I had been half American, half something else, maybe Kuwaiti. My language had been half English, half Hindi, maybe some Arabic.” She and her brother, Karim, go through their family’s belongings and save a few precious mementoes. After this eleven-year reckoning with the past, she reflects that Kuwait has not done the same: “There was no reckoning with the invasion, nor what preceded the invasion—the folly and squander of oil.” Finally, though, she can now “glide into the future” and leaves the country. (Editorial note: Al-Nakib’s most recent essay for WLT, “In Ruins: Reflections beyond Kuwait,” appeared in July 2021.)