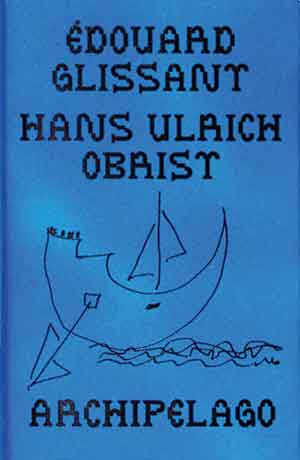 THE ARCHIPELAGO CONVERSATIONS  or, alternatively, Archipelago, is a unique little book focusing on Martinican novelist, poet, and philosopher Édouard Glissant (1928–2011). Published by Isolarii Press in their “Island series,” it is described (on their site) as follows: “Our books revive the extinct genre of the same name—the ‘island books’ that emerged at the start of the Renaissance. Bound together were poems, stories, and artworks—each a supposed island, a space that held a singular idea. We take up this genre-bending format to navigate the turbulence of our times. Each book is a ready-to-hand island. Together, they are a growing archipelago. Islands from which to view the world anew.”

This particular book, the sixth in their series, is designed both as a tribute to the philosopher of the pensée archipélique and a personal memento acknowledging two decades of friendship between Glissant and his interlocutor, the Swiss art historian and curator Hans Ulrich Obrist. Obrist discovered Glissant in the late 1980s and has been a great admirer of his work ever since. Obrist’s unreserved respect for Glissant suffuses the book.

As he explains in a three-page preface, “Archipelago compiles, edits, rearranges, and recomposes the complete recordings, transcripts, notes and letters of my encounter with Édouard.” What will follow is indeed a most original collection of different “conversations,” oscillating between the casual and the formal: on one hand, the exchanges recall the classic genre of the interview, with Obrist prompting “Édouard” to reflect on a series of broad themes and contemporary issues that resonate with his philosophical thought and creative oeuvre. The interview format, here, gives the reader the opportunity to hear Glissant interpret twentieth- and twenty-first-century thought through the lens of some of the major concepts he developed and refined in Poetics of Relation, Caribbean Discourse, Treatise on the Whole-World, and beyond, and with references to several of his creative works. This is probably the most predictable part of the book, in which the interview sets the stage for the author to reiterate (and to some extent make more accessible than the original essays) his influential conceptual propositions, in this case—and among many others—on creolization, colonization, globalization, opacity, rhizomatic thought, memory, and American cultures. To be fair, the discussion toward the end of the book on Glissant’s unfinished project of building a museum is fascinating.

And yet Archipelago is not just a collection of interviews. As much as it confirms Glissant’s brilliance as one of the major thinkers of globalization in the francophone world, it also offers a precious glimpse into a different Glissant, whose “conversations” with his friend Hans Ulrich Obrist took the form of years of personal dedications to his books. Fourteen signature pages are reproduced and disseminated throughout Archipelago, and they are anything but ordinary. In addition to poetic lines accompanying the dedication, they are adorned with all sorts of signs and drawings of sailing ships (a recurring motif, which serves as the book cover illustration as well), maps, islands, trees, spirals, and other more esoteric calligraphy. They are works of art in themselves, as if meant to visually interrupt the solemn voice of the philosopher with the disorderly visions of the artist. Ultimately, it is the juxtaposition of Glissant’s public writings with the intimate creative pages shared by Obrist that generates the real reading pleasure of this singular book. This, and the beauty of the object itself, a small, colorful, and bold book that fits in the palm of your hand and leaves you amazed at its density.