Breaking Boundaries: The Science of Our Planet by Johan Rockström & Owen Gaffney 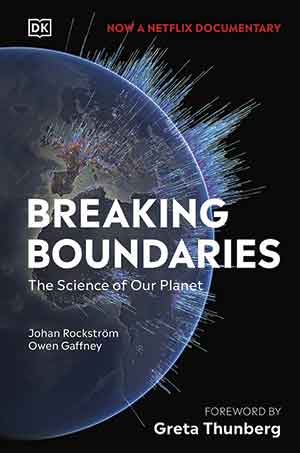 WHY SHOULD JUST this book on climate change science and preemptive policies merit a review in a literature magazine? There are so many, and only few can claim to be “literature” in any aesthetic sense. They also say roughly the same things with different emphases, from easygoing optimism for the subteens to magisterially prescriptive, like Bill Gates in How to Avoid a Climate Disaster.

“Breaking boundaries” refers to a more specific concept than just damage to Earth’s life-sustaining ecology. Johan Rockström and his teams in Sweden and Germany have kept watch on nine defined systems: climate, biodiversity, bio- and geochemical flows (e.g., nitrogen and phosphorus), land use, atmospheric aerosols, chemical pollution, freshwater use, ocean acidification, and stratospheric ozone depletion. There is a real newness about the research that has gone into investigating the permissible flexibility of the systems’ boundaries. The core ideas have been honed by disputes, prospered intellectually, and by now, each topic trails new terms and concepts like a getaway car for just-marrieds.

Back in 2015, a key paper in Science argued that four systems had already changed irreversibly: climate, biodiversity, bio/geochemical flows, and land use. In the same year, the UN defined its “sustainable development goals.” Breaking Boundaries discusses the sense of emergency driven by IPCC reports (most recently in April 2022) and the Paris Accords (2019) but focuses on international collaborations such as the EAT-Lancet Commission and the UK’s Earthshot idea with its multimillion-dollar annual awards to incentivize action.

Does Breaking Boundaries rate as literature? This is fact-laden nonfiction, but lead author Owen Gaffney—an Englishman of many parts but briefly described as a “science writer and global sustainability analyst”—is an outstanding communicator. His writing balances elegantly between science and policy, expertise and accessibility, didacticism and gentle explanation. Two Swedes contribute expertly: Greta Thunberg is the world’s most articulate and deservedly most famous climate activist. Johan Rockström, professor twice over, is founder of the Stockholm Resilience Centre, director of the Potsdam Institute for Climate Impact Research, and chief scientist at Conservation International.

The mission to alert a wide, possibly still-climate-skeptical public to the critical importance of systems boundaries led to a few radical decisions. I guess that “outreach” was the reason for publishing with DK, whose company aim is to “promote learning” and specializes in generously illustrated nonfiction books. True, this may not have worked out quite as well as hoped, given the floods of less grown-up books in DK’s current catalogs.

True, the illustrations are superb, if your taste runs to scientific findings represented in full color. Better still, there is a chance to see these graphs in motion: the Netflix documentary Breaking Boundaries features Johan Rockström as lead presenter. His discussion of the critical systems and our last chances to stabilize them is, unsurprisingly, incisive and masterful, but his mesmerizing, slightly demonic presence is unexpected. The seriousness of the message is spelled out also in the glorious nature imagery we have come to expect in films like this.

Why not let Greta Thunberg sum up the place we are all in together, whether we like it or not? Having dealt with the motivating concepts of justice and morality—“Or guilt, if you so wish” (a deeply Swedish line of thought)—she says: “Our hope lies in . . . the best available science and that this knowledge can spread fast and far enough.”