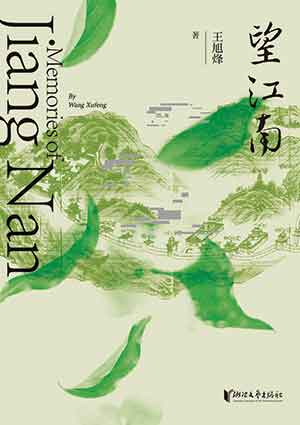 WANG JIANG NAN (Memories of Jiang Nan) is claimed by Wang Xufeng, the laureate of the Mao Dun Literature Prize in China, as “the real third one” of her award-winning Tea People Trilogy, as it fills the gap between the original second and third ones from 1945 to 1964 against the background of the founding and construction of the People’s Republic of China. It serves as an intertwined embodiment of character portrayal, tea culture, regional characteristics, and transformational history.

The novel centers on the fate of the Hangs in the irreversible torrent of history. Engaged in the tea business for generations, the Hang family’s development is synonymous with the transition of the country, with every step mingled with a trace of tea. Members of the family are committed to various careers in the revolution and reconstruction, separated and scattered across the country; in the end they are reunited in the Hang family courtyard with a promising future.

The protagonist, Hang Jiahe, the eldest brother of the Hangs in charge of family affairs, manages the Wangyou (Forgetting Sorrow) Teahouse with all-inclusive work from processing to selling the Longjing tea that the Hangs’ business specialized in. Jiahe is the best example of the term “tea person” whose spiritual core is “self-restrainedness,” a personality characterized by Daoism and Confucianism, which Wang explains as “to hold himself, to know when to attack and to compose.” As a nonpartisan, he bears witness to the historical events calmly, yet his patriotism inspires him to devote himself to the development of China’s tea business with enthusiasm and fortitude. He is compared to a special container for making tea named Manshenghu, a square-shaped teapot that symbolizes integrity and uprightness.

Tea culture is highlighted in the text, recurring throughout the novel in the form of proverbs, poems, and anecdotes, where knowledge of tea and tea wares are illuminated in a natural way. Time-honored and widely enjoyed, tea in China is not just a common drink but also a cultural icon with a spiritual dimension. Making tea is art and drinking tea is Dao, a mental doctrine inextricable with lifestyle and personality.

Jiang Nan in the title refers to regions south of the Yangtze River where Hangzhou, the setting of the story, is situated. With verdant mountains and abundant waters, such as the Lion Peak Mountain and the West Lake, Hangzhou is the home of Longjing tea. Food like West Lake fish in vinegar sauce and fried turnip strips with flour add a distinct local flavor to the story. The customs, including offering sacrifice to the Kitchen god and cooking Laba rice porridge, are not simply presented but shown as the vicissitude of the conventions from old to new.

Rich in cultural connotation, Wang Jiang Nan is not limited to the growth of a family but inclusive of the quality of a nation and the development of a country. Wang features a plain and poetic narrative style, making this novel both readable and prized as a work of literature.