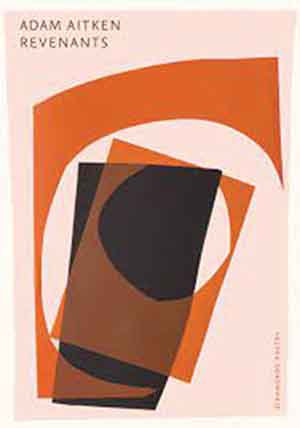 BEFORE OPENING THIS book, I kept picturing Leonardo DiCaprio fending off a lunging set of teeth and claws, alone in a North American forest. What is it about Australian poets borrowing titles from other works (Kevin Brophy’s Seeing Things arriving a decade after Heaney’s book; Anthony Lawrence’s prizewinning Headwaters decades after Peter Skrzynecki’s famed collection of the same name)? Rather than the physical tribulations perpetrated by an ursine tormentor in the Iñárritu film, in this collection Aitken is a protagonist haunted largely, it seems, by the spectre of a dead father.

The book is divided into three sections: the first opens with the aforementioned ghostly antagonist reminiscing in “Xmas Singapore 1957,” midair, in a letter to Aitken’s grandmother: “Apéro-time then / English goose + trimmings, / a bottle of BOAC Bordeaux, / 2 anti-acid for dessert / all in best company.” What to make of this failed-degustation-as-poem; is heartburn to be the stand-in for sentiment? Overleaf, in “Cognac and Cigars,” we are taken next to Kowloon, where the colonizing father leads an ease-filled life within which there is “no luxury you can’t have,” including, it seems, a son who in midlife remains unable to comprehend these brazenly opulent scenes as places his forebear springs from.

In the opening poem of the second section, we see the poet and his dying father, “both agree[ing] to agree / more often, or not to say we didn’t agree”; these are complexly affective odes to an irresolvable tension lingering, it seems, long after the man has died. Recalling the schoolgrounds of his youth, Aitken summons “private moments” during which he “devise[s] sermons on fear and fathers // in the voice of my mother,” and it remains telling that so many of the lines in this book fall on a feminine cadence (including the two just cited). Is this collection a ventriloquist’s ambit that speaks back not only to the father but to any colonizer, subjugator, oppressor, originatory Law?

In the third section, we are predominantly in Europe, often France, that “country of affective disorder” ossified into headstones and otherwise, according to Aitken, “the hard-done-by” who have roamed these grounds and their myriad strife for millennia. It is here that the poet locates himself, momentarily, lurching into text at an age that brings with it “biography, memoirs / of the self as a young man” who may well find himself in the presence of as many dead as living companions. But rather than exorcisms, these poems seek instead to commune with dead parents, foreclosed histories, selves both long lost and yet preternaturally present.

In Revenant, Aitken’s poems rove autoethnographically over far-flung territories of experience compressed into memory, affect distilled into sets of possible ideas, those places he has lived in or traveled through offered as compelling spurs for new ways of knowing who, and what, and how to be, in and on his own terms. These poems are indeed “half-way house[s] of fact and magic”; they are also expressive salves against pyrosis, proffering the catharsis of image as digestible truth.