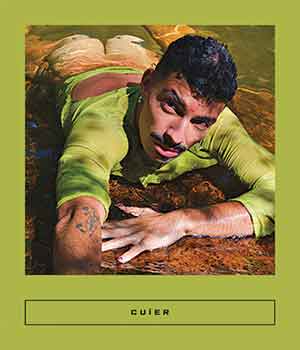 AS HAS BEEN said before in various contexts, Brazil is a nation of continental proportions and of equally vast contradictions, and this holds true to how Brazilians and their social, cultural, and political institutions regard sexuality. On one hand, the country likes to portray itself as having the most beautiful, sensual, and sexually free population on the planet. On the other hand, an array of issues related to sexuality continue to be taboo: from sex education in schools, to abortion, to homosexuality, despite same-sex marriage being legal in the country since 2013. In fact, social discrimination based on gender and sexual orientation, as well as violence against women and the LGBTQ+ community, remain quite prevalent across Brazil, particularly amidst the current sociopolitical climate, when the sitting president promotes misogyny and homophobia and the religious right has become ever more influential. Yet this is the same country that holds the largest, and perhaps liveliest, annual gay pride parade of all.

These same contradictions are reflected in how the literary establishment has dealt with Brazil’s long-standing tradition of gay, lesbian, and queer literature—letters, diaries, narrative fiction, theater, and poetry that depict and give expression to nonnormative sexualities. A benchmark in this tradition is Adolfo Caminha’s 1895 novel O bom crioulo, which was translated by E. A. Lacey and published by Gay Sunshine Press in 1982, with the title Bom-Crioulo: The Black Man and the Cabin Boy. Critics have called Bom-Crioulo a founding text of Brazilian gay literature; it is not, however, the first Brazilian literary work to depict homosexual desire, as recent critical studies, informed by queer theory and LGBTQ+ social movements, have shown. In this new light, critics have been reexamining the oeuvre of writers whose homosexuality or queer identity had been overlooked or closeted (often by the writers themselves for fear of censorship or worse). A case in point is that of Mário de Andrade, the seminal modernist writer and central figure in the 1922 Week of Modern Art, whose nonnormative sexuality has now been openly acknowledged, allowing for new critical readings of his work.

The bilingual Portuguese/English collection Cuíer: Queer Brazil is a valuable addition to the significant body of gay, lesbian, and queer Brazilian literature, foremost because of the outstanding selection of writers it brings together. Two iconic names of Brazil’s contemporary urban literature figure among them: Caio Fernando Abreu (1948–1996) and Ana Cristina Cesar (1952–1983), both of whom were widely acclaimed by the public and critics with the publication in 1982 of Abreu’s book of short stories, Morangos mofados (recently released by Archipelago Books in a translation by Bruna Dantas Lobato), and of Cesar’s collection of poetry, A teus pés (At your feet). Abreu’s and Cesar’s works resonated particularly among a young readership, as they gave voice to the discontents and sense of displacement of those generations that lived through Brazil’s military dictatorship and its immediate aftermath.

Other well-known names in the collection are novelists João Gilberto Noll and Wilson Bueno, and, from a younger generation, fiction writers Cidinha da Silva and Carol Bensimon and poet Angélica Freitas. Cuíer also presents new authors who are just starting to gain recognition in Brazil, among them Tatiana Nascimento, Raimundo Neto, and Cristina Judar. The diversity of voices in the volume certainly represents one of its greatest appeals. Not only are they writers of different generations, from all regions of Brazil; they are white, Black, and of mixed race. In fact, some of the many terrific texts in this collection are Nascimento’s powerful queerlombola poetry (a play on Quilombola, a person who lived in a quilombo, or a settlement of escaped enslaved people), and da Silva’s sober reflection on white society’s indifference toward the plight of their Black citizens. Finally, Cuíer’s very diverse voices not only represent male gay or lesbian desire but, moving way beyond binary limitations, give expression to the full spectrum of human sexuality and queer identities, including those that refuse any such identification. Igor Furtado’s photographs of queer and trans Brazilian subjects add a different type of narrative to the collection while enhancing the volume’s beautiful visual appeal.

Many different literary genres and styles comprise the volume, and readers will certainly have their favorite pieces. One author who deserves special mention is Raimundo Neto, for his delicate narrative about a trans kid in poor northeastern Brazil, whose supportive and determined mother lets him dress as the bride for a school celebration (“The Harvest Bride”). English-language readers will appreciate this delightful story as well as Neto’s “Lalinha’s Auntie,” despite the mistranslation of some colloquialisms. Also noteworthy is Wilson Bueno’s “The Irascible Mr. Hannes,” finely translated by the late Christopher Larkosh. Being a bilingual anthology, the book doubles the pleasure for those who can enjoy the original Portuguese-language texts side by side with the work of such skillful and creative translators as Dantas Lobato, Johnny Lorenz, Julia Sanches, Natalia Affonso, and others. A precious gem.