The Illogic of Kassel by Enrique Vila-Matas 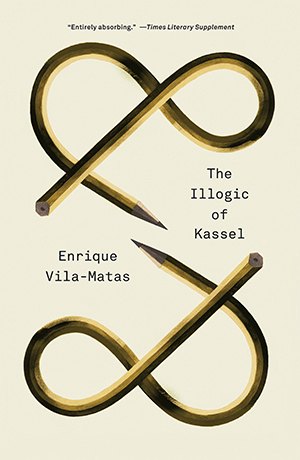 This “novel” is published in tandem with A Brief History of Portable Literature, the 1985 prose work that brought Enrique Vila-Matas sustained prominence. Both books epitomize his preference for hybrid genres and contravening conventions, showing a three-decade arc for his prolificacy. Superbly translated by Anne McLean in tandem with Anna Milsom, The Illogic of Kassel is becoming his most popular and best received book, gathering major critical praise and endless interviews. That reception is related to his revisiting and putting in perspective the metafictional devices (he appears as a character in about thirty of his works) and themes that he never stops fine-tuning with great wit and erudition.

As much as Vila-Matas never disappears into his plots’ surroundings, his readers always have the impression that he conveys an internally balanced self, even when replotting or mocking the hinge pins of contemporaneity. The Illogic of Kassel’s fable turns on his being invited mysteriously to dOCUMENTA, the renowned contemporary art exhibition held every five years in Kassel, Germany. He is to spend a week as a writer-in-residence/installation in a Chinese restaurant on the fringes of the town, which gives him the chance to “escape from literature and open up to other artistic disciplines.” It turns out to be a revealing aesthetic, existential and linguistic experience/performance, or so it seems. In his brilliant, discursive calibrations (which include literary criticism and events relayed as free association), Vila-Matas surgically sutures fact and fiction, a typical turn complicated here by extravagant translations of languages the narrator actually does not know.

The outcome is not a collection of the many versions of just about everything literary that Vila-Matas had or has in mind, or a “ready-made novel,” or an unknown twist that David Shields never knew about. Rather, this is a happy and optimistic coming to terms with what the well-established Vila-Matas writes, a turn started in Dublinesque. Within those thoughts there is also a critique of narrative practices vis-à-vis the public. Vila-Matas can be highbrow, full of other arts, and if he garners acclaim from Pedro Almodóvar and Paul Auster, it is because he manages to better their artistic practices in a fascinating fashion that can be disturbing but friendly and identifiable at the same time.