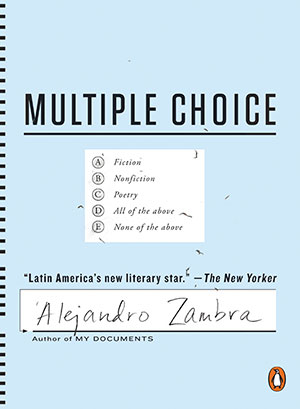 Alejandro Zambra is a comprehensive reader of Bolaño and Perec, and surely of Natalia Ginzburg and Cesare Pavese, although he says one is dumb if worried about influences. There are kernels of these authors throughout his work, which is consistent and luxuriant in poetry, essay, and short stories. Multiple Choice, an unclassifiable literary artifact and his most recent work, channels and centrifuges the many genres this young, already-established Chilean practices.

Multiple Choice was published as Facsímil in Latin America and Spain by four different houses between 2014 and 2015, with additional printings, and not by his usual publisher. This fact may confirm that the criteria for selection and publication still marshal a literary conservatism shattered only by realism that jolts. Publishing how and where he wants presupposes for Zambra introducing a prose that gives him greater recognition and enhances Latin American literature. Multiple Choice, ingeniously titled and superbly translated by Megan McDowell, universalizes great books not known among anglophone readers.

The plot is deceptively simple: its structure, as the author asserts at the beginning, is based on a Chilean verbal aptitude test for college applicants, a template in place until 1994. The selection of words that would confirm certain levels of reading comprehension are enhanced by multiple-choice exercises for compositions, while others seek coherent meanings, elimination of phrases that do not provide relevant information, etc.; a Chilean version of the American SAT.

Underlying Multiple Choice’s sample questions and Zambra’s “vibrant sense of story” (James Wood) is a veritable literary manifesto for his generation’s sensibilities and defeats, constructed by parodying, politicizing, or showing the futility of anachronistic exams. Multiple Choice reinvents Zambra, as did Bonsai, The Private Lives of Trees, and My Documents. This path solidifies him as a writer most attuned to language and time and reaffirms the cumulative opinion that he is the best Latin American writer born in the 1970s.

Zambra writes for a literary Latin American future or rewrites a past still unconveyed in a clear or brutally honest fashion by his cohort and immediate predecessors. In between are a world of prizes, a limited critical capacity to appraise, and the anointment of exhausted writers. In world literature, a book like Multiple Choice opens new options for exploring other latitudes and resolves the risk of monotonous and frivolous readings; while also reaffirming the ability to say something truly novel, for our limited present and conflicted future.