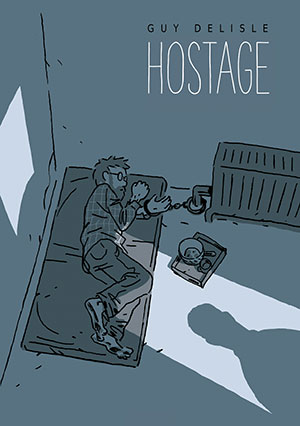 Christophe Andre was working as a Médecins Sans Frontières administrator in Ingushetia, just west of Chechnya, when he was kidnapped and held for 111 days. His story might well have been forgotten but for Guy Delisle’s extraordinary graphic talent. Delisle manages to get inside Andre’s mind and plumb his soul to provide the reader with a visceral experience of a most frightening and disorienting captivity. Having recorded interviews with Andre, Delisle has firsthand information with which to work. He uses it well but moves beyond mere facts to create a tour de force exploration of resilience.

Using only shades of blue-gray, white, and black, Delisle’s panels follow Andre from the beginning to the end of his ordeal. The visuals are not emphatically fascinating in themselves or that varied—how much can you do with a man tied to a radiator in a small room, occasionally visited by a captor with a bowl of thin gruel? It is rather the territory within Andre’s mind that captures the reader and characterizes his movement from optimism and the certainty that his colleagues are plotting his rescue, to deep despair that he has been forgotten, to self-blame and self-incriminatory feelings of impotence.

Andre doesn’t have a language in common with his captors, so his only recourse is to interpret their action or nonaction in conversation with himself. At a certain point, two of his captors, all of whom are made singular through the succinct genius of Delisle’s drawing, enter the room and offer him a glass of vodka, which he accepts, drinks with them, then thinks, “Is this fraternizing with the enemy?” Afterward, he berates himself for giving in to the very human craving for interaction.

He holds onto sanity by stating the day and date and rehearsing his eventual release and reunion with friends. He exercises mentally by replaying historical battles. He amuses himself by nicknaming his captors and takes immense sensual pleasure in reaching and nibbling a found garlic clove when he is moved to a new location.

Being a hostage is worse than being in prison because prisoners can count down to a specific release date, he thinks. A hostage not only loses freedom but exists in a constant state of unknowing and also anticipation. There is irony, clearly, in the parallels to the essential human condition.

The monotony is undeniable, and Delisle captures it without creating a monotonous book. His telling of the story magnifies Andre’s profound and utter humanness. We struggle with him, despair with him, and feel the fear alongside him. Ultimately he contemplates the possibility of escape. I have no intention of spoiling this for the reader, but the conflicts and self-examination entailed in his internal dialogue are a lesson for the ages.

We know from the beginning that Andre survives to tell his story to Delisle so the ending is foregone. However, the satisfaction here is not the conclusion but the incredible journey that we take along with him. From this dark and harrowing tale come deep pleasure and great sustenance for the reader.