I Don’t Want This Poem to End: Early and Late Poems by Mahmoud Darwish 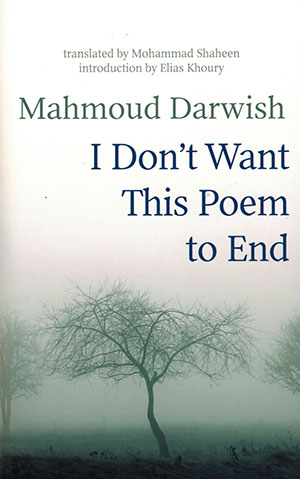 Mahmoud Darwish’s last, posthumously published collection of poems (2009) contains some of the poet’s most accomplished and most challenging poems. The “unfinished” state in which he left these poems at the time of his death (August 9, 2008) compounds the challenge still further. Much of the arresting artistic quality in this collection arises from the poet’s ultimate liberation from the many constraints—social, political, conventional, etc.—that had circumscribed, to one degree or another, his creative poetic imagination. This drastically altered state of Darwish’s poetic sensibility is most evident in his unprecedented treatment of the tropes of imminent death and his lifelong preoccupation with the image of the Palestinians’ national other: the Israeli.

Thus, rather than a callous and stifling menace, death figures here as a stern but considerate messenger on a sometimes negotiable but ultimately irrevocable mission. In the opening lines of the poem that gives the collection its title, Darwish utilizes the temporary respite granted from death to write perhaps the most powerful celebration of life, literally in the face of imminent death, in all of Arabic poetry. Likewise, the image of the Israeli antagonist undergoes a metamorphosis that transforms him here from a mortal enemy to an unavoidable partner in predicament. These and other similar universal themes are rendered in Darwish’s habitually charged and suggestive imagery, made all the more appealing by the poet’s elegant style and proverbial mastery of Arabic prosody.

While these poems are, on the whole, a welcome addition to the body of Arabic literary texts translated into English, Shaheen’s translation occasions a number of concerns. To begin with, the very title of this anthology is misleading: it uses the selfsame title of Darwish’s last poem, which, as noted above, also serves as the title of the poet’s posthumously published collection. This “coincidence” would have been less objectionable perhaps had the content of the translation conformed to the content of the original Arabic text, but it does not. While the Arabic version contains only poems from the last phase of Darwish’s output, specifically those that had not been previously published in any collection, Shaheen’s translation includes not only poems from earlier periods and collections but also a prolegomena by Lebanese writer Elias Khoury (who collected and prepared Darwish’s last poems for publication); an introduction by Shaheen himself; a letter that Darwish wrote to his brother from prison in the 1960s; an essay by Darwish “on exile”; an interview that Shaheen conducted with Darwish; and a piece by Faisal Darraj on “the last meeting with Mahmoud Darwish,” said to have taken place thirteen days before the poet’s death. Consequently, the poems of Darwish’s last collection make up less than a third of the entire Shaheen collection.

Unfortunately, no discernible logic seems to bind the disparate parts and pieces assembled here into a coherent or resonant whole. Furthermore, the indiscriminate lumping together of bits and pieces from various stages of the poet’s creative career runs counter to his evident desire to free his latter poetry from the various constraints that bound his earlier poems to nonliterary or aesthetic concerns.

Finally, the translation could have benefited from a rigorous editing and a closer attention to questions of syntax, diction, transliteration, and the fine but crucial distinction between translation and interpretation. These reservations notwithstanding, however, Shaheen’s valiant effort in this momentous undertaking deserves due recognition.