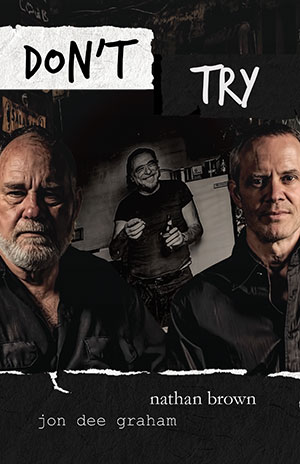 Contemporary poetry can be formulaic: the vague flow of emotion Mary Kinzie calls the “Rhapsodic Fallacy,” the neoconfessional anecdote Donald Hall refers to, succinctly, as the “McPoem.” Instead of a formula, Don’t Try gives us a chemical reaction resulting from the mixture of countercultural legend Charles Bukowski, former Oklahoma poet laureate Nathan Brown, and gravelly voiced singer-songwriter Jon Dee Graham.

Each poem in this book takes its title from a line in a Bukowski poem, which Brown and Graham use to launch their own poems, sometimes trading back and forth within the same poem and sometimes each writing parallel poems inspired by the same line. A careful reading of the prefatory material seems to suggest that, of the two typefaces used in the collection, Brown is represented by a Times New Roman style and Graham by something like Courier. The reader will enjoy watching the interplay of these three voices.

Bukowski clearly sets the tone of the book. For instance, the first poem in the collection takes its title from some very Bukowski math—“Zero Times Zero Times Zero”—and then offers conjecture on what that equals. For Graham, it is “the distance between my beliefs / and my illusions / divided by what I know.” For Brown, it is “the miles per hour / at the end of the accident.” This tone of wry, down-and-out wisdom runs through the book all the way to the back cover, where Brown and Graham offer, in place of the usual blurbs, snippets from the worst reviews they have received.

The best poems in this book are emotionally honest and directly observed. In “Only Hollywood Boulevard,” Graham vividly re-creates a late ’80s LA street scene, including the “panhandler / using a badly broken and / defaced ventriloquist’s dummy” to solicit dollars from passersby. Brown starts “In the Middle of Texas” with a stunning image of the “hell-hearted sun” on a summer day driving “its golden nail / straight through the planet / and out the other side.”

Nearly every page of this collection offers such fine observations and memorable images. Graham, known to most as a songwriter, holds his own with Brown, and both Brown and Graham prove themselves worthy successors to Bukowski’s Skid Row brand of poetic beauty.