The House of Jasmine by Ibrahim Abdel Meguid 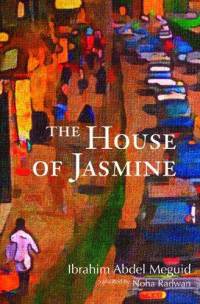 Shagara, a minor employee in the shipyards of Alexandria and the first-person narrator of The House of Jasmine—a translation of 1984’s Bayt al-yasamin by one of contemporary Egypt’s most prominent novelists—lives in a radically fraudulent and corrupt society. President Sadat’s operatives are in the habit of organizing, and financing, public demonstrations of support for the regime and its foreign policy of US-inspired rapprochement with Israel. Shagara is supposed to pay his fellow workers to line the streets and applaud when President Nixon drives by. In fact, he excuses them the street-lining and cheering but only gives them half of what he should, keeping the rest for himself. Later he becomes president of the workers’ union. He decides, however, that what he really wants is out. That, and the private contentment of marriage.

The three friends with whom he often spends his evenings in the local café are as alienated as he is. In a long, condemnatory speech, ‘Abd al-Salam points out that “none of us has a purpose to his life”: Hassanayn reads to avoid self-examination, Magid hides from life in his pharmacy, and the speaker, at thirty-three, considers that he is too old to make a difference.

On a street often walked by the young men is a “mysterious and magical” villa surrounded by jasmine trees and unpolluted by compromise and evasion. Its owner and his wife have daughters, “the most beautiful of all creatures.” But the house is eventually abandoned; its flowers wilt and their scent is no more. Later it is demolished, with a money-grubbing apartment building projected to take its place. Although the fictitious house of jasmine is razed, the novel of that name stands as a love letter to the ancient city of Alexandria and its beauties.

However, the novel’s main focus is political. It is an effective, if occasionally tendentious, condemnation of Sadat’s Egypt (but did Shagara really think “The government has certainly been wrong to raise the prices of so many products. All these masses can’t be wrong” when caught up in the riots of January 1977?). The translator’s afterword, written before the electoral victory of the Muslim Brotherhood, optimistically compares 1977 with Tahrir Square and the fall of Mubarak, and hopes for a better future for “these masses.”