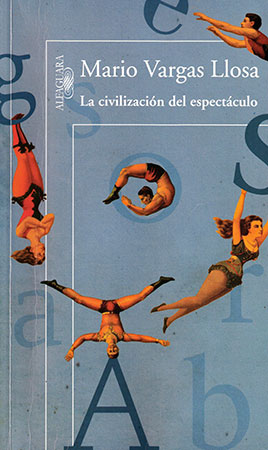 La civilización del espectáculo is a controversial and pessimistic book that also brims with vibrant energy and instigating ideas, many of which might make the reader consider Mario Vargas Llosa a politically incorrect writer. His main argument proposes that culture, as it has been known traditionally, is on the verge of disappearing; it is disappearing at such a fast rate that no one can fully grasp the disastrous consequences of the cultural changes that are taking place before our very eyes.

The book centers on four main themes: banality of culture, disappearance of eroticism, frivolity of politics, and religious tolerance. Common to these four scenarios is the fact that they have emerged within a type of society that privileges, above all, spectacle and entertainment. The author asks the following question: “What does the civilization of spectacle mean? A civilization that gives the greatest importance to entertainment, a civilization in which enjoyment and the avoidance of boredom are the universal passions.”

For Vargas Llosa, the problem mentioned above reflects a moral issue that is causing, without exception, the total collapse of high culture throughout the Western world. The reasons are many; one of them—perhaps the most damaging for Vargas Llosa—originates with the democratization of culture: since a generalized agreement regarding what is good and bad, culturally speaking, is long gone in today’s society, we now live in a time of confusion in the sense that everything has value and nothing has value at the same time. According to Vargas Llosa, the reason for this is that what is understood to be culture is nothing more than “a pleasant way of passing time” and by no means a profound experience associated with questioning and exploring human existence.

The consequences of this state of things regarding culture are obvious: art has become vain, easy, commercial; true criticism is inconsistent and more and more absent from the cultural realm; commercial value is more important than real value; massification of cultural products is based on criteria associated with selling and gaining profit; the presence of intellectuals has been restricted to universities, and within this scenario their critical work remains trapped as cryptic academic language that has no connection with the world outside academia. However, according to the author, what’s most important is that the loss of social and political power by the traditional cultural elites was not followed by a cultural democratization in which each person would develop individually a sense of freedom, reflection, and personal spirituality. On the contrary, people have never been as uninformed, oblivious, alone, and isolated as they are today. The worst for Vargas Llosa is that in today’s society, this new cultural condition is not a concerning factor since ignorance is not perceived as a problem in a world where everything is allowed.

This book may be perceived as showing a great deal of nostalgia for the disappearance of the hierarchical orders imposed by former ruling elites who belonged to what once was called “high culture.” However, La civilización del espectáculo is much more than just a defense of traditional cultural values; it is a sharp reflection that warns us of the danger that contemporary society represents for the future of Western civilization: a society in which deep thought and criticism are perceived as suspicious and even tedious activities.