The Song of Synth and Absinth by Sébastien Doubinsky 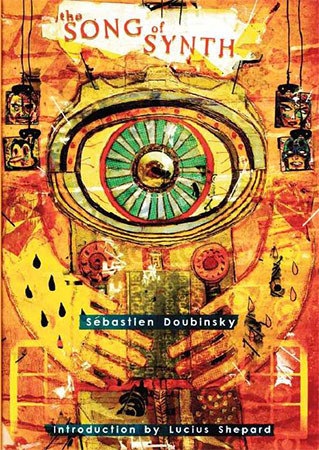 Synth is a drug, able to induce full sensory hallucinations indistinguishable from reality. But Synth is new, of uncertain provenance, its long-term side effects unknown. For Markus Olsen, hacker protagonist of The Song of Synth, Sébastien Doubinsky’s novel of poetry and politics, Synth offers “easy escape. Mind in the clouds, a pure blue sky, low music humming in the background. Illusions to fight other illusions. The ghost of freedom against the ghost of oppression.”

Markus needs Synth. Ten years ago, to avoid imprisonment for treason, he sold out and agreed to track hackers for the government’s Security Center. Now, friendless and awash in guilt and self-loathing, he works in Viborg City, a corporate-controlled nightmare of commerce and conformity where “Everybody is blond and everything is clean. Trademark.”

Gradually Markus begins to experience “hallucination leakages,” “angst attacks,” and worse. Sensing that he’s losing control of Synth, he stops taking the drug. But it remains active. Increasingly paranoid, unsure of his identity, and unable to trust memories or real-time experience, Markus escapes to the ancient city of Samarqand. There, governmental machineries of power are challenged by a public passionately devoted to poetry, and the assassination just prior to Markus’s arrival of their national poet, whom Markus knew ten years earlier, has raised passions to a potentially violent pitch.

Both parts of The Song of Synth—the first set in Viborg City and its virtual environs, the second in Samarqand and the Dreaming Chambers in the mountains beyond—feature conspiracy, mystery, and murder. But these are MacGuffins. What draws us into the novel is Markus’s quest, amid massive Synth-induced ontological uncertainty, to find self-absolution, purpose, and identity. What ensnares us are Doubinsky’s mastery of narrative, subtly poetic prose, and passion for the themes of politics and literature, with which he challenges us at every turn.

Synth is absent from the other novel in this book, as are Markus and the cities, real and virtual, of The Song of Synth. In Absinth, reality is not so much uncertain as under siege. In one of three interwoven plots, Zeus sends Hermes on a globe-girdling road trip. His mission: to visit Odin, Legba, Baiame, and a host of other “retired gods” to solicit their views on portents the Delphic priestess Pythia has detected, faint signs of an impending change in “the Rules of the Universe,” a change that may herald their return.

Meanwhile, Sid Saperstein, the financially strapped, ethically challenged owner of Vinland Press (“I publish porn and pulp fiction”), is facing fatal blowback from a gambling debt he cannot repay. At this moment of crisis, who should show up in Sid’s office but the archangel Gabriel (“You can call me Gabe”). Gabe offers Sid a deal. In return for a million dollars plus change, Sid will publish and distribute The Gospel According to Jesus. Sid is skeptical; one of the chapters is entitled “Destroy all churches.” Gabe is reassuring: “Jesus actually wrote this. He finished it yesterday. The New Testament is pure Jove propaganda. Bullshit. This is the real McCoy.”

Meanwhile, catastrophe is breaking out all over. Major political figures die in freak accidents. Immigrants by the score return home from America and Europe, causing Western economies to collapse. Celebrities spontaneously combust. Doubinsky keeps us abreast of breaking developments through hilarious, deadpan pastiches of news bulletins, which he intersperses, Dos Passos–like, throughout Absinth.

What makes this most improbable mélange work are Doubinsky’s intelligence, mastery of tone, and unerring rendering of character. Take Iris, prime mover of the third narrative. A young cleaning woman and aspiring pop singer, Iris discovers that smoking reefers induces visions of scenes from the Bible, though not as we know them. In Doubinsky’s hands, this character, who could easily topple into cliché, comes to life so vividly that we care about her as we do about Sid, Markus, and the other denizens of his not-quite-our-world. And even in this roller-coaster Ragnarok, Doubinsky challenges us to think about religion and belief.

Born in France, Doubinsky lives in Denmark, where he teaches French and English literature at the University of Aarhus. The author of several books of poetry and some ten novels published in France, he is bilingual. This is his second English-language book of fiction. His first was the The Babylon Trilogy (2009), a triptych of tales linked by a common setting and the passion for poetry and politics that animates The Song of Synth. That his fiction is not published and promoted by major presses is an outrage. That is it available at all is a gift, a wondrous opportunity for readers, and reassurance, however slight, that our civilization has not quite sunk to the vacuous level of Viborg City. (Note: The Babylon Trilogy is available in hardcover and e-book format [pspublishing.co.uk] and as a trade paperback from Black Coffee Press under the title Goodbye Babylon [2012].)