Chronicles of a Liquid Society by Umberto Eco 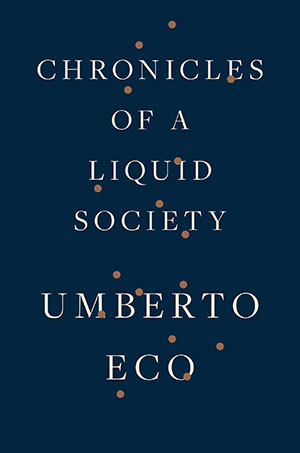 When Umberto Eco died in early 2016, he had just finished putting together a collection of essays entitled Pape Satán Aleppe: Cronache di una società liquida. The English translator, Richard Dixon, dropped Dante’s phrase from the title, perhaps for fear that American readers would fail to make the connection, and kept the subtitle. Yet “Pape Satán Aleppe” is infamous for its elusive meaning, which ties in wonderfully with Eco’s theme in the book—one of exploring, at least in part, just how difficult it is to discover any meaning, let alone an absolute meaning, in contemporary society.

Chronicles of a Liquid Society is Eco’s final gift to his readers. Made up of previously published essays from his long-standing column in L’Espresso, titled “La bustina di Minerva,” this collection takes as its point of departure Zygmunt Bauman’s conceptualization of a liquid society, specifically as outlined in his book Liquid Modernity, published in 2000, followed by several more books on the subject. In his opening essay, “The Liquid Society,” Eco claims that the “crisis of grand narratives,” perhaps first heralded by Jean-François Lyotard in his work The Postmodern Condition, led to the ripple effect, or aftershocks, that we are now experiencing in society. Each age experiences a certain degree of uncertainty, but contemporary society, with its collapse of ideologies, signals an age where uncertainty may be the latest manifestation of a grand narrative to emerge in the twenty-first century. Thus, Eco’s original title. This is not to say that the English title is insufficient or robs the book of its identity, but the Italian title provides readers with a slightly different and complicated take on Eco’s overall theme.

Chronicles of a Liquid Society presents Umberto Eco at his most playful and piercing. Exploring everything from the future of the European Union to Twitter, Eco demonstrates once again just how smart and thoughtful he can be. The essays collected here present us with a mind as sharp as it was in youth but with the wisdom to discern the subtleties of things from the vantage point of age. This collection also presents us with Eco the curmudgeon, the one who deliberately bumps into people who are talking on cell phones while standing on a street. Largely absent is the younger, self-deprecating man who struggled to eat peas on an airplane.

Eco had more than just a general knowledge about the world and our place in it; he was one of contemporary society’s most resonant and gifted public intellectuals. We should be thankful that Eco’s parting form is the essay and not an academic book or a novel. Certainly, Eco was highly skilled at all three forms, but the essayist in Eco is, I suspect, closest to showing us who he was as a reader, which is really where his spirit resided in its truest form.