The Age of Skin by Dubravka Ugrešić 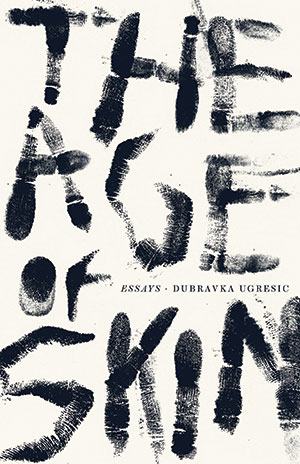 QUITE SIMPLY, IT IS DIFFICULT to decide where to begin with Dubravka Ugrešić’s The Age of Skin since there’s not one, but a multitude of possible beginnings. Though the book is not a work of fiction but nonfiction, a book of critical essays, many of her most salient comments relate to literature and fiction. “Literature may be on its last legs, but its infirmity is due not to the historical ascendance of life over literature but to literature’s own self-destruction, brought about through the earnest efforts of the very people who propel the literary process: the avaricious publishers, laggardly editors, wishy-washy critics, unambitious readers, and authors lacking in talent but greedy for fame.” That quote might be a worthwhile point of departure for reading the book since it clearly establishes a point of view Ugrešić has not only on the world of literature but on a multitude of issues.

Written between 2014 and 2018, the essays leave very few people and issues unscathed. Her book deals very much with displacement, exile, and statelessness. In fact, she went into exile from Croatia after being labeled a “witch” for her antinationalistic stance during the Yugoslav Wars. Stylistically, parts of The Age of Skin might remind readers of her novel Lend Me Your Character, especially the segment “Finishing Touches” within the chapter “Steffie Cvek in the Jaws of Life,” in which Ugrešić segments and/or gives subtitles to the chapters. The subtitled segments within the chapters in The Age of Skin are as diverse as the “Dentures” worn by the Bosnian Serb Ratko Mladić, found guilty of committing war crimes, crimes against humanity, and genocide in “Why We Love Movies about Apes,” to the brilliant chapter “The Scold’s Bridle,” in which Ugrešić revivifies the “law of Telemachus,” which is “identical to the classical model of the absence of women from the public, intellectual, creative, political, and media spheres” (see WLT, Sept. 2016, 36).

It would be difficult (if not impossible) to reduce a work of such critical and creative breadth, but Ugrešić is a writer, and one can close by citing a line in which she quotes Zamyatin (in a letter to Stalin), in which the former states that “‘true literature’ can exist only where it is created, not by diligent and trustworthy functionaries, but by madness, hermits, heretics, dreamers, rebels, and skeptics.” And, as it turns out, by Croatian expats.