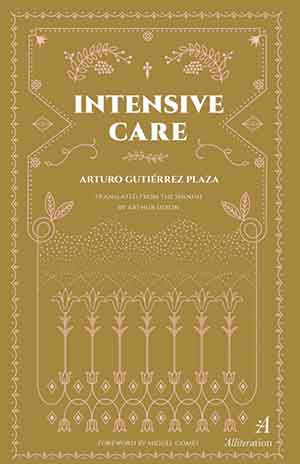 “POETRY IS THAT WHICH is worth translating,” says Eliot Weinberger in 19 Ways of Looking at Wang Wei, his 1987 treatise on the difficulties of just such an enterprise. “Great poetry lives in a state of perpetual transformation, perpetual translation: the poem dies when it has no place to go.” In other words, translating poetry from one language to another requires a kind of transformation in which the poem succeeds on its own terms not only in its source language but also in the target language. Otherwise, to paraphrase the American poet and translator Robert Bly, the poem is what gets lost in translation.

Arthur Dixon’s translation of Venezuelan poet Arturo Gutiérrez Plaza’s Cuidados intensivos succeeds brilliantly as both translation and English-language poetry. Gutiérrez Plaza’s voice in Spanish, his diction and rhythms, are those of everyday speech—earthy, gleaming like a rock in the sunlight. Yet at the same time it is visionary and incantatory, carrying with it poetry’s power to bring something momentous into being. To be at once straightforward on the surface but suggest the deepest human dilemmas and emotions is a hallmark of this book, a paradox Dixon’s translation brings out beautifully. For example, in “A True Story,” Gutiérrez Plaza’s speaker tells us, “It’s true, today you know nothing / for certain, / except that from one dawn to the next / things happen.” This gesture toward the mystery of existence—that our lives are disorderly, random, and mostly unfathomable—is rendered in the most straightforward diction, without the kind of embellishment that would weaken the gravity of the realization.

The major themes of Intensive Care accumulate and dovetail throughout the book through such oracular pronouncements. The book’s title suggests illness and mortality but also the vocation of the poet to impose order through language on chaos, even though language has the power both to bring us closer and to separate us. In “Written at the Wrong Time,” the speaker tells us, “Had it been said before, / had it been said without pause, / then maybe, just maybe, all writing / would be in vain and time would do the talking.” Other themes of the book include the mysterious interventions of fate and the difficult situation of contemporary Venezuela at this particular historical moment.

Intensive Care is Gutiérrez Plaza’s fifth book of poems but the first to be translated into English. He has won major awards in both Venezuela and Mexico and is currently a professor emeritus at the Universidad Simón Bolívar in Caracas. Given the high quality of both the poems and the translation, here’s hoping Dixon will bring us other of Gutiérrez Plaza’s books in English.