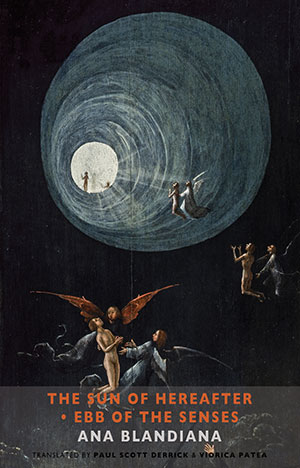 Fresh from their magisterial translation of Ana Blandiana’s My Native Land A4 (Bloodaxe, 2010), translators Paul Scott Derrick and Viorica Patea now deploy their considerable skills working with Blandiana’s previous two volumes. One of Europe’s best poets, Blandiana is amazing for her imaginative capacity to make readers feel they share quite intimate conditions with the poet, even as the poems complicate and deepen their sense of an inescapable metaphysical dimension to experience. One admires her craft as an exquisite rhetorician while recognizing how deeply rhetorical structures can cut into our sensibilities (see WLT, Sept. 2016, 43).

The final stanza of “Definition,” about the Romanian people, offers an example of Blandiana’s full powers as a rhetorician: “Too defeated / Not to be free; / Too free / Not to be humbled, / Too humbled / To die.”

The choice of organizing the poem by infinitives is a brilliant means of capturing the timeless repetition of the waves. And the rhythm, at least in English, manages to re-create for the reader the sense of being subjected to the work of the four participles that impose the pressure breaking down the rock to sandy grains. But the best move is the shift that occurs with the second infinitive. Repetition here calls attention to a remarkable shift from physical pressure to the expansive parallel pressure of “infinity” that measures the now-incredible capacity of the stone to maintain its own integrity. And then the final twist—a beautiful balance between the strength to resist in silence and the terror of knowing that all resistance is ultimately in vain in relation to cosmic ordering.

There are many such richly concentrated rhetorical structures in this book, including the poem “Prayer,” which affords a rare contemporary moment where the poem actually embodies plausible prayer because of the intimacy of address and the intelligence to ask something plausible and important of the addressee: “Source of all things, / Geometrical place in the void / That demands to be filled / To come into being; / Path by which you enter / A place where nothing exists / If it hasn’t been pronounced; / Let the syllables / Fall / From your holy mouth, / And penetrate me / And plant the seed, / Make me put forth answer-plants / From which will grow out of / Silence supreme / Trees of sound / So the autumn winds can shake out / meanings.”

I love most in this poem how all the metaphysical implications settle into the quite concrete metaphorical act of the wind shaking out meanings from trees of sound. When Blandiana goes wrong in my eyes, the poems go the other way, from lovingly realized imaginative situations to rather vague spiritual claims. It is as if Blandiana’s increasing sense of the pointlessness of any ethical agenda (as the very helpful introduction puts it) requires her finding a home in such abstraction.

But the poems seem richer in their tethering to earth than in their reaching into the backdrop of eternity. This is “Mixture”: “Beautiful necks / like slippery braided / snakes, / Rosettes of bodies with skins of stone, / Columns or trunks, / Birds with four, six or eight legs, / Winged beasts with feathers made of metal, / Sophisticated mixtures / of criteria, / species, / conditions, / Confused on purpose and incompatible / In a time that spreads out like a stain of oil / Over the limpid surface of eternity.”