The Arab of the Future: A Childhood in the Middle East, 1978–1984: A Graphic Memoir by Riad Sattouf 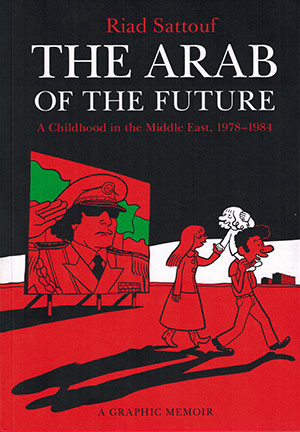 Riad Sattouf’s The Arab of the Future: A Childhood in the Middle East, 1978-1984: A Graphic Memoir may have a mouthful of title, but it’s a carefully worded one. Specifically, one would be hard-pressed to categorize this as either an autobiography—of Sattouf’s conspicuously well-remembered youth—or as a biography, namely of the author’s father, Abdul-Razak. Shrewdly labeled a “graphic memoir” to split the difference, The Arab of the Future unflinchingly details the Sattoufs’ lives as a young family living in Libya, France (Riad’s mother’s birthplace), and then Syria (Riad’s father’s birthplace). In fact, Sattouf’s observations of each country—distinctly color-coded in the art with Libya tinted yellow, Paris bathed blue, and Syria tinted in pink—have a near-caustic edge to them. In needling his father’s pro-Arab views or chronicling the odd rituals of childhood in each country, Sattouf, a satirist for Charlie Hebdo magazine, may have been aiming for humor. But the overall effect of this first in a two-volume series is a feeling of ugliness; Sattouf’s art may be cartoonishly clean and expertly rendered, but the world he describes is a confusing, disturbing one.

To some degree, the disorienting and disturbing nature of each locale is likely an intentional one. Wherever he lives, young Riad’s innocent sensibilities clash with the regional custom: the gunplay of his Libyan playmates, the scatology of his French kindergarten class, the naïve anti-Semitism of his Syrian cousins. But this glimpse into the odd world of children loses its amusing nature when the adults prove to be just as grotesque in nature, pushing their inadequacies on to the next generation of the indoctrined or dreamers.

Sattouf’s work emerges from the wave of Franco-Belgian comics creators that include Joann Sfar (The Rabbi’s Cat), Lewis Trondheim (Dungeon), and Marjane Satrapi (Persepolis). Unlike the others, however, Sattouf’s The Arab of the Future fails to translate into a coherent narrative for the American reader, it seems. Perhaps his second volume, covering 1984–85 and already available in French, will aid in making all the random pieces of the first more palatable. At present, though, this initial piece of Sattouf’s international past leaves one tensely dreading the future rather than rising to meet it.