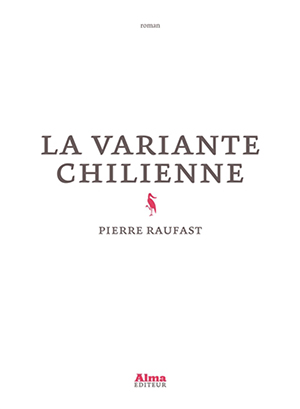 Pierre Raufast’s latest novel begins rather grippingly with a getaway scene in which a middle-aged teacher confides in the reader that he is hiding one of his teenage pupils under a blanket in the backseat of the car. Just as he tells us that he has planned on cloistering her for two months, his car is stopped by a policeman for a routine check.

It’s compelling to start a story with such a riveting, risqué incipit, but it’s ultimately a little misleading if the rest of the novel is replete with what André Gide called bons sentiments. Novels don’t have to possess generic coherence, of course, and every author is free to dangle red herrings to scale up suspense. In a crime fiction novel, you expect to be misled: it’s part of the generic expectations attached to the genre itself. With a novel that begins like a reworking of Nabokov’s Lolita, however, it comes as a bit of a dampener that the narrator is actually a well-intentioned school teacher with such a lack of interest in sex that he hardly seems to notice that his pupil is staying with him at all.

As if Raufast senses that his novel is on the verge of floundering in back-patting, mawkish good feeling, he regularly spikes it with the occasional gory incident to the extent that the novel keeps oscillating from one extreme to the other. After a longish episode of do-goodery, you get to expect that something brutal is going to happen in the next few pages as a compensatory measure. Thankfully, Raufast knows how to keep his propensity for bland sentimentalism in check by other means.

What makes La variante chilienne ultimately worthy of interest is Raufast’s relish for eccentricity. The zany-neighbor figure he conjures up as a more captivating cynosure for the novel possesses idiosyncrasy in abundance in no small part because he is afflicted with amnesia. The only way he can hold onto his memories is by collecting stones. By fondling the variously sized stones, much as he sucks on his pipes, he is able to have miraculous near-total recall of the women he has been with and treats the reader to the most surprising stories, the tone of which recalls Amélie Nothomb’s quirky aristocratic shenanigans.

Raufast’s inventiveness is ultimately compelling, even if some of his ideas seem a little strained and contrived to the reader used to anglophone fiction. It’s a form of creativity that is characteristic of one strand of French contemporary writing. Raufast’s storytelling capacity is also considerable, making this novel more of a novel-cum-short-story-collection similar in manner to his debut work, La fractale des raviolis. Nevertheless, the threads of the various Scheherazadean narratives are for the most part neatly tied up at the end, drawing loosely flying material into a relatively coherent novelistic whole.

La variante chilienne is an ideal read for those who enjoy the pleasures of being transported from one digressive story to another in a convivial, bedtime-story-for-adults atmosphere. Raufast’s prose style falls short of the rhapsodic, but it has regular flashes of verbal artistry that galvanize the stories into life.