An Orchid Shining in the Hand: Selected Poems, 1932–1960 by Lorenzo Calogero 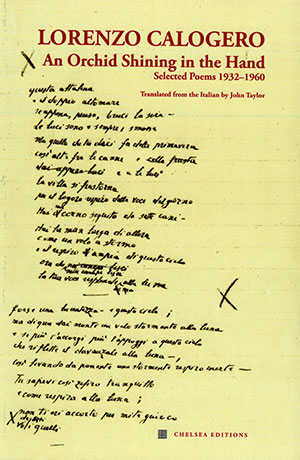 To dip into this volume, with its splendid translator’s introduction, is first to connect with a vital Italian poetic tradition. Although Lorenzo Calogero was an isolani—a lone poet living at times as a doctor in a village of Calabria, virtually unrecognized in his lifetime—this beguiling selection manages to call forth something of the hermetic aesthetic of early- to mid-twentieth-century Italian poetics, for which we can be grateful.

There is a quiet, brittle craftsman’s integrity to this body of work one finds so rarely in our present, hypertextualized cultural space. Authenticity is an elusive property; yet we know it when we sense it. Shearing always close to essence, Calogero has got something of Tomas Tranströmer’s elemental concentration—but without accepting resolute sparseness as the price for transcendent clarity. His startling sensuality often relies as well on deft turns of unexpected grammar, as here: “Sleek ribbons from birds / and a black orchid among the twilight kisses / is now holing up in a frown. / You and your dark swollen hair / and, thereby, over this vast oasis, / a fugitive over the waters / in a reverberation of roses . . .”

Something akin to Rilke appears in this volume too—albeit shorn from the latter’s immense cultural framework—in the generous selection of fragments given here from Calogero’s later notebooks (1957, 1959–61), which echo the offhand depth and brilliance of notebook entries, for example in the volume of Rilke’s Uncollected Poems translated by Edward Snow.

John Taylor has labored admirably to retain the poet’s fluid, intellectually striking elisions, the syntactic mutations among lines, which show so well an advanced mind grappling into a metaphysics of poetic thought. Mulling over to unlock wisdoms compressed in these elisions is effort well rewarded; reading these poems attentively is to swim in swift strokes toward deep poetic waters.

The sheer sonority of the original Italian, which seems to have been a principal compositional metric of Calogero’s, cannot be retained whole cloth in these translations, sadly—Italian is made for such hard yet fragrant lyric—nor can the overt difficulty of these poems’ original grammar, especially in the later notebook fragments, be retained in fullest obscurity. Yet thanks are due to John Taylor for having labored well and long to conserve this rarefied flavor for us in English. So much of value and beauty is preserved in lines so neatly wrought on nearly every page. “Either this is a prayer / or some foreboding storm. // I expect to call you back by shouting / quickly, heedlessly; or this is the end, / the silence of everything. // And you were so opaque, shapeless to other human beings.”

This book serves to reestablish the legacy of a significant twentieth-century Italian, indeed European poet. It belongs in our collective literary soul—and in our libraries.