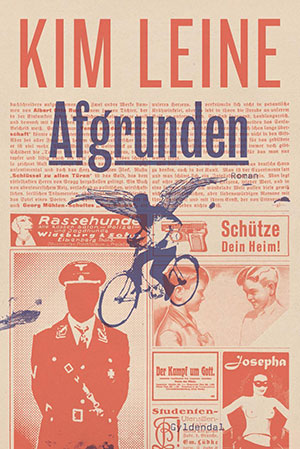 Kim Leine’s new novel is not about Greenland; the Danish ex-colony is the setting of Kalak (2007), Leine’s much-praised debut; Tunu (2009); and internationally successful Prophets of Eternal Fjord (2012), the first volume of a planned trilogy. Instead, Afgrunden (The abyss) explores war-torn northern Europe during the early decades of the twentieth century.

The twin brothers, Ib, a medical student, and Kaj, a theologian, live in Copenhagen, but we meet them in 1918 as volunteer soldiers on their way to join Finland’s brief but vicious civil war. Class has influenced the brothers’ choice to fight with the establishment “Whites” against the proletarian “Reds.” The twins fight well; Ib actually seems to enjoy killing. This first part of the book is exceptional, an unflinchingly observant story about men at war.

The second part, set in the interwar years, follows the brothers in a series of kaleidoscopically shifting scenes. Their love lives are restless, but their professional lives dominate: psychopathic Ib ends up as a psychiatrist then sidetracks to become a magic healer, while morally ambivalent Kaj gives comparative religion a miss and becomes a successful foreign correspondent. He is a keen observer of Germany, but as the Nazi regime claws its way to power, Kaj is first baffled and then frightened enough to betray his Jewish mistress to the police—a “normal” response in abnormal times.

The third part, a rush of unchaptered narrative, takes place during the German occupation of Denmark and focuses on Kaj, now a methamphetamine-driven coordinator of samizdat news-sheets. Ib, too, has joined the Resistance but is a shadowy figure, close to cardiac collapse. The brothers both die in 1944: Ib in a hospital respirator and Kaj in Gestapo headquarters. He jumps to his death after having been tortured into submission by a German officer, the ex-husband of Kaj’s one-time lover.

So far, so gripping, but the fourth part is more remarkable still. It consists of short entries in Ib’s civil war diary during the months when, fascinated by the pain of others, he went AWOL in the Finnish hinterland. In part 1, that war, as seen by Kaj, makes some sense; “Ib’s war” is insane and unendurably beautiful.

Arguably, the novel’s structure is further complicated—purists might call it “messed up”—by extras such as hospital case notes, a Gestapo report, philosophical asides (the spirit of Kierkegaard hovers), quotes from the Book of Revelation, fragments of letters, and alarmingly funny poetry. But the writing—intelligent, intense and sensuous—makes all these elements fuse into a compelling, readable whole.

Afgrunden is an extraordinary and truly great novel.