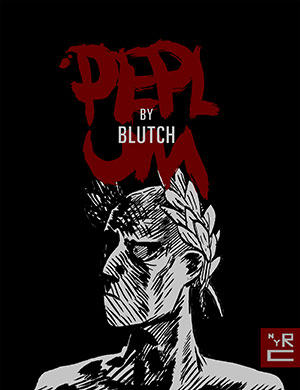 “The nostalgia for purity, the ghost of a perfect love—these are a drunkard’s despair.”

Spoken by the work’s impostor protagonist’s seemingly mute “little brother,” this line speaks to one of the underlying themes of Blutch’s Peplum: the ideal of love can make a man intoxicated to the point where his situation, his very survival, is at stake due to his attachment to what he wishes love to be rather than what love is.

Across a backdrop of misadventures in what Peplum’s English translator, Edward Gauvin, calls Blutch’s attempt “to create a sequel to . . . the Satyricon,” we experience the protagonist’s journey with two main loves: his found “little brother” and his ideal love, a “goddess” encased in ice. The former gives him a taste of what seeming unconditional, immediate love is, which he trades for the latter, an effigy of love. While attempting to woo an actress, the conflict between those two loves, including the loss of the former while still longing for the latter, leaves him both spiritually and physically impotent. Interestingly, Blutch pushes this idea even further with the realization that the ideal of love itself is transitory, possibly even as fictitious as the assumed identity of the protagonist himself.

While love, and the idea of love, is one of the underlying themes, the brutality and immediacy of the others, such as sex and death, are brought out more in Blutch’s artwork. He utilizes a scratchy, deceptively simplistic style that brings a real grit and action to the world being displayed. While neither graphic nor gratuitous, it gives weight to sequences of violence, including the frenetic battle for the protagonist’s life to claim the identity of Publius Cimber, the capture and seeming rape by oddly limbed beasts of women, and the pathetic nature of his impotence in finding another real and immediate love in his actress suitor.

In a way, this dichotomy between the immediacy of the artwork and the more esoteric nature of the possible narrative mirror the two forms of love that underlie the story. The artwork is the real, tactile love that could well be lost when chasing the ideal of love, while the narratives and themes presented could just be a created fiction.