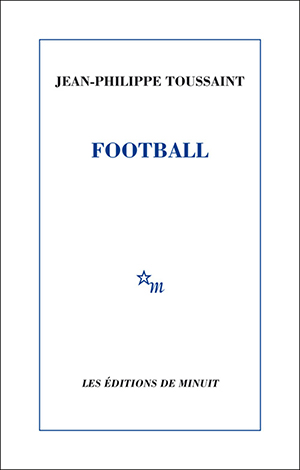 Jean-Philippe Toussaint introduces his new book on a very saturnine note, suggesting that it will please nobody, neither intellectuals, who are indifferent to soccer, nor soccer fans, who will find the book too intellectual. Were he writing about soccer and nothing else, Football would be far less intriguing. But many other things occupy Toussaint here: how the phenomenal world is often less attractive than the world conjured in our imagination; how melancholy serves both to sharpen and to blunt our perception of things; how a deliberately naïve, childlike approach to experience can help deflect our fear of dying; how the past escapes from us despite our best efforts to recapture it. “I’m pretending to write about soccer,” Toussaint confesses, “but I’m really writing, as always, about the passage of time.”

That is not to say that soccer is absent from this book; to the contrary, it’s everywhere. But it interests Toussaint principally by virtue of the ways in which it fires his psyche. As staggeringly narcissistic as such a notion may seem, it is useful to remember that Toussaint has built a very distinguished literary career around the representation of the narcissistic subject; in a real sense, it’s his stock-in-trade.

With that consideration in mind, Football may in fact be one of his less ego-driven texts because it opens patently onto the world and not exclusively onto a benighted human consciousness. That world reaches its apogee of excellence every four years during the World Cup. For a month or thereabouts, one is free to indulge one’s chauvinism without the risk of acting in a basely nationalistic manner. One can inhabit a world that is fundamentally timeless, passing one’s time in order not to feel the burden of time passing. One may participate, both virtually and really, in an articulative dynamic that engages the attention of much of the planet, one way or another.

All this takes place in a sort of existential stoppage time, wherein fact takes its cue from fiction, a state of play that Jean-Philippe Toussaint clearly finds most refreshing indeed.