In the Wake of the Poetic: Palestinian Artists after Darwish by Najat Rahman 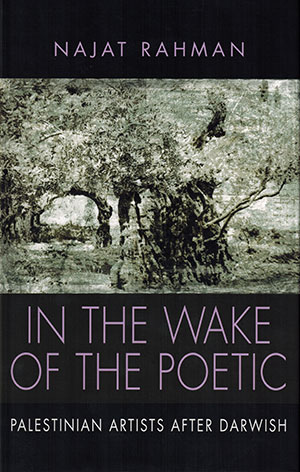 This book is not about the great Palestinian poet Mahmoud Darwish (1941–2008) but is, in many ways, a tribute to him and his poetry, which engaged Arabs everywhere and especially Palestinian poets and artists and resonated further on the international scene.

Najat Rahman examines here the works of a select number of Palestinian spoken-word poets, performance artists, visual artists, and musicians who are contemporaries of Darwish in the two decades since the Oslo Accords (1993 and 1995). In rigorous detail, she analyzes their aesthetic founded on loss, dispersion, dispossession, and transformation engendered by the politics of Palestinian cultural expression. Like Darwish, they are shown to assert a common legacy: historic Palestine, the national poets, the Nakba of 1948, and the memory of the 1982 Beirut war—this legacy being considered as the basis of a new belonging. Despite inimical forces intending their effacement, Palestinians are shown, through modalities of art and poetry, to persist in belonging to the land of their ancestors and in having a strong identity of their own.

Although contemporary Palestinian poets have been studied to some degree, and books and articles have been published about them, Palestinian performance artists, visual artists, and musicians have not been studied as much. Rahman tries to redress the balance in this small book of 190 pages, and she believes they all represent contemporary Palestinian political conditions and, as importantly, Palestinian aesthetics. Furthermore, she demonstrates in analytical detail that they continue Darwish’s vision and poetic legacy, and she convincingly argues that their work is nonetheless original and not derivative.

To show that the political in good poetry and art is not mere propaganda for a cause, Rahman uses Jacques Roncière’s theorization of “dissensus” in his book Dissensus: On Politics and Aesthetics (2010). The political in art is thus redefined, and art is shown to be able to interrupt dominant consensus and become dissensual while keeping its aesthetic qualities when it is generically good art. She applies this notion to the study of Palestinian poets and artists in the Palestinian territories and in Israel as well as in the Palestinian diaspora across continents. The result is this unique book with an acute vision into Palestinian poetry, art, and aesthetics, and into Palestinian identity and the current conditions in Palestine under Israeli occupation.

While the reader is offered an understanding of Palestinian poetry in one chapter dealing with Suheir Hammad, Liana Badr, and Ghassan Zaqtan, he is treated to a review of the Palestinian cinema of Elia Suleiman, Hany Abu-Assad, and Rashid Masharawi in another; reading further, he is introduced to the visual art, photography, and videos of Palestinian artists Emily Jacir, Sharif Waked, Eman Haram, Mona Hatoum, Rehab Nazzal, and others in a following chapter. Palestinian rappers and hip-hop groups are studied in a later chapter as an expression of the politicization of youth, mostly protesting against the dispossession and alienation of Palestinians, sometimes even in Hebrew in order to reach Israeli audiences and sometimes in English in order to reach others still. In all cases, the poets and artists are shown to continue the poetics of Darwish and some other Palestinian writers, with whom they dialogue or intersect.

Najat Rahman’s book is appreciated for being a good conspectus of Palestinian artists in the last two decades, particularly in the wake of Darwish’s powerful poetic works. With conciseness, it is successful in offering a clear study of a complex topic; and, in close readings of poems and art performances, the author beautifully shows how these artists express their belonging to Palestine despite many forces aiming at their erasure and how they have done so in aesthetically accepted ways.