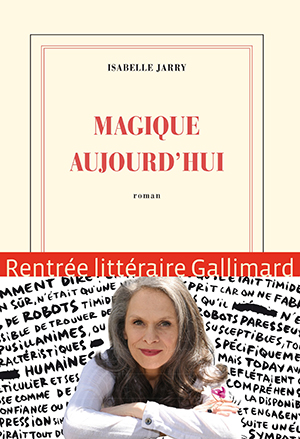 Isabelle Jarry, who has written science fiction and novels for young adults, invents a story taking place in 2051, Magique aujourd’hui (Magic today), where the relationship between an android and a human being, who has spent eighteen hours a day on his computer, is narrated in striking prose, which sometimes recalls that of Edgar Allan Poe. The narrator assumes that androids are capable of thought and emotion.

A young man, Tim Bix, is taken by government authorities to spend a week of “Disconnection” in a place where there is no way of communicating with the outside world through telephones, computers, or tablets. He barely misses his present girlfriend but is disturbed not to be in contact with Today, his robot, who has been trained to accompany him in his research as well as in his daily life. Today has adopted the actions and thoughts of his master, even Tim’s love of jazz. He is the “other” who allows Tim to abolish solitude. When Tim is no longer there, and cannot communicate with him, Today must make his own way in the world.

The novel alternates between chapters dealing with Tim and with Today. Each of them has a rather odd relationship with an older woman who changes his perspective. Tim has been given a week of rest after the disconnection clinic with a woman who assigns him manual tasks in her garden. While he is aware that the robot, like the human being, is the product of electrical impulses, and knows that, like himself, Today is capable of “intelligence, sentiments, and emotions,” Tim’s work leads him to appreciate the world of nature, to which he had been oblivious. Jarry describes poetically the gradual awakening of Tim to the sounds of birds, the colors of the sky, the calm. He wanders off into the woods, without a destination.

During this week Today is taken in by an aging singer, who tries to use him as an accompanist, then leaves him for a lover. Today manages to reboot his system and make contact with Tim’s family, where he learns of Tim’s cure of disconnection. He develops independence.

The contrast between the two beings—Tim and Today—leads to an ironic conclusion in which the robot has more strength than the human who trained him.