Incidents in the Night Books 1 & 2 by David B 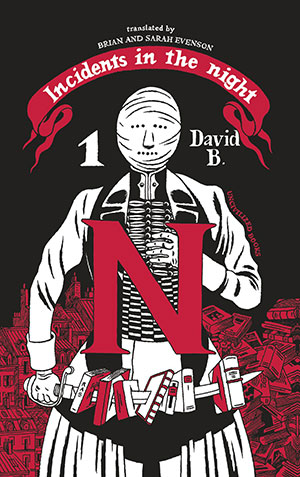 Cartoonist David B.’s work is a study in Western culture cast in rich illustrations. His graphic memoir Epileptic (L’Ascension du haut mal, 1996–2003) garnered comparisons to Max Ernst, but the two-part Incidents in the Night demonstrates a wider scope of influences, which are allowed to run free in this fictional escapade. Incidents in the Night is an incredible example of pastiche filtered through brilliant imagination.

Book 1 follows the fictional David B. through Parisian bookshops, seeking the nineteenth-century journal Incidents in the Night. The search winds through dreams, conspiracies, and death. Gathering characters in his search, David B., the audacious Maria, the surly Commissioner Hunborgne, and the mystical bookshop owner Mr. Lhôm seek a rogue group of Parisian bandits, The Fleet, whom they believe are working for the undead Emile Travers.

David B. begins gathering clues, which lead him to his femme fatale and a gruesome murder, and ultimately to his perceived demise. Book 2 picks up the story, and the fictional Jean-Christophe appears. In this context David B.’s brother, familiar to anyone who has read Epileptic, Jean-Christophe is uncomplicated, with only a passing mention of his “disease.” It is difficult to separate David B. the author from his fictional counterpart, as Jean-Christophe is on the cover and a prominent character in the second installment. Jean-Christophe, recognizable by his glasses, girth, and round, scarred face, has come to Paris to save David B. in a moment that feels exceptionally personal in the otherwise surreal landscape.

In the true nature of bande dessinée, David B.’s narratives are incomplete without the illustrations, as the text and images work in symbiosis. Like woodcuts, his work calls to mind Lynd Ward or Frans Masereel, and the frames are imbued with a gravitas in the deep black and contrast of black-and-white. As David moves throughout stacks and piles of book, “Each of these bookstores secretes its own mythology and its own history,” and “we could continue to unroll the panorama of these places across the twenty districts.”

Incidents in the Night immediately calls to mind postmodern works: Italo Calvino’s If on a Winter’s Night a Traveler, Borges’s short story “The Library of Babel,” and Umberto Eco’s Foucault’s Pendulum. Simultaneously, you are drawn into the nooks and crevices of a private detective story. Marie is told by the pontiff of the Eyes, “You must always search. Read. Never stop reading everything around you, you must read everything.” David B. exudes this wealth of knowledge, and he reinvents it through his art.