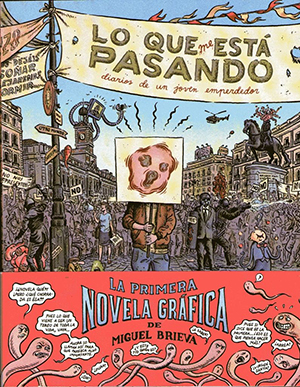 In it, Brieva (b. 1974, Seville) draws the negative consequences of late-stage capitalism on common people’s lives: labor and economic insecurity, environmental pollution, isolation and degradation of democratic institutions. At the same time, Brieva shows an example of awareness-raising through the main character, Víctor Menta, who finds a way out of isolation and despair through political affiliation and social compromise.

Víctor is a young scientist who, unable to find a job in his area of study, alternates between holding unstable and low-paying jobs with periods of unemployment. He lives alone in his late grandmother’s flat, watches TV until he gets rid of it one day, and drinks and smokes at the park with other young people in similar situations. Unable to make sense of the reality he is living in, Víctor starts to hallucinate and have conversations with inanimate objects and invisible beings on a variety of social and political issues.

In late-stage capitalism’s worldview, Víctor would be labeled a “loser.” However, since the capitalist society in the comic is populated by isolated individuals who uselessly try to make sense of their world and the difficulties in their life via consumerism, media entertainment, counseling, or drugs, Víctor’s hallucinations and his inability to fit in become more an expression of him being aware of the irrationality of his culture. Awareness, however, is not enough. Plans to destroy Víctor’s neighborhood in order to build a mall and condominiums mobilize people living in that area. Víctor joins them and becomes part of a citizen movement to defend people’s rights and liberties against business interests supported by political institutions.

By drawing Víctor’s vital experience, Brieva shows the interconnection between personal and social dimensions and how social compromise and political affiliation are the way out of both personal and social problems. In doing this, Brieva’s work relates to the social and political movements in Spain (15M, Indignados, or Podemos) that aim to bring politics back into people’s everyday lives. The hope is to implement a democracy that represents people’s interests and needs rather than the interests of affluent minorities, banks, and businesses.