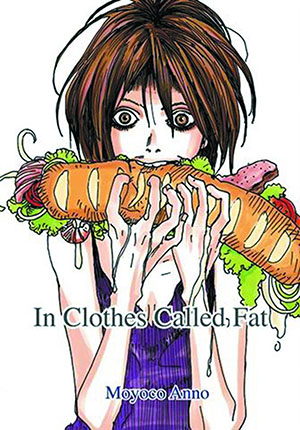 In Japan, where reading manga is a national pastime, there is manga for everyone, for every age. You may be familiar with the shōjo and shōnen genres that preteen to teenage girls and boys avidly read. Josei manga has a different audience: slightly older women. Targeting a more mature readership, josei manga features older characters, not usually children or teenagers, and focuses on more adult themes such as careers, aging, financial means, and having families. Nor does it shy away from more realistic portrayals of romantic relationships, which may depict explicitly drawn material. Moyoco Anno’s In Clothes Called Fat is a gem in the sea of josei manga that succeeds in drawing the reader into a captivating tale of one woman’s quest for happiness in a body that just won’t allow it. Or so she thinks.

Within the first pages we find our protagonist, Hanazawa Noko, homely, soft-spoken, overweight, and quite clear on how to navigate a world where most men treat her with disgust or indifference and most women use her as a sounding board to feel better about themselves. She gets along mostly fine because she has a steady job and comfort in the love and stability of a fiancé with whom she’s been involved for eight years and who assures her that he loves her, weight and all, until one day she sees him with another woman. Unsure how to react, she decides losing weight is the ideal plan: to win him back, to reinvent herself, to make a better life for herself where people will like her and treat her with dignity.

There are many relationships in this book: the relationship of Noko and food, her one true comfort; the relationships that many of the characters have with body image—their own and others; and the relationships people have with their insecurities and the actions they take when they feel exposed. In Clothes Called Fat isn’t a pretty affair. No shōjo sparkles here. Instead, you’ll find a gritty read with perhaps no true heroes. Realistic circumstances married with raw emotion carried along by characters so flawed and realistic compel you to keep reading. Noko, once overweight and unhappy, keeps shedding pounds to become someone else, but she must ask herself, as the reader should, at what cost? And to what end?