The Art of Flying by Antonio Altarriba 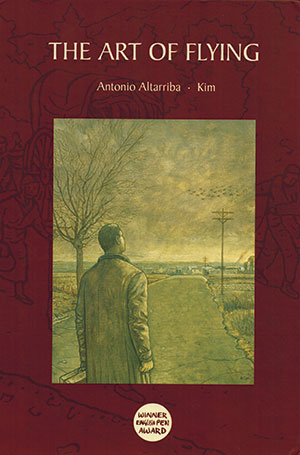 Antonio Altarriba’s The Art of Flying splays open the Spanish civil war, and subsequent World War II, through the experience of the author’s father, Antonio. This graphic biography hails from the generation defined by war heroics, and one reads with the expectation of redemption. However, with the father’s suicide framing the narrative, and each chapter of his life noted with a passing floor as he falls, the reader is left to navigate a life of despair. Altarriba says, “It took my father ninety years to fall from the fifth floor.” The Art of Flying is an acutely honest portrayal of the Spanish experience during World War II and the devastating impression it makes on one man.

The Art of Flying was originally published in Spain in 2009 as a series and translated into English by Adrian West in 2015. Illustrator Kim excavates the dusty rural fields, a German work camp, and sensual sex scenes with black-and-white illustrations, deep shadows, and a willingness to bring the grotesque character of people to the forefront. Altarriba’s understanding of this historical era is colored by the hopelessness of his father.

Long before skillfully eluding nurses and fellow residents in his nursing home to find the ideal perch from which to jump, Antonio is an unhappy and restless boy in the small Spanish village of Peñaflor. After escaping to Zaragoza, joining the fight against Franco, and being imprisoned by the Germans in France, Antonio finds himself with only desperate leads of employment and wealth. Entangled with hucksters and criminals, Antonio is plagued by his conscience and ethical standards, disallowing himself happiness or satisfaction. His only content moments throughout the book are with his son, driving a car, or engaged in the occasional sexual tryst. It is the recurrence of the car—from the car he builds with Basilio—and the elegant Hispano-Suiza to the stolen Russian military trucks—that gives the reader hope that Antonio will eventually fly.

Antonio is best understood in his last moments, moving toward his final flight. This is the time when he acts with decisiveness, dignity, and creativity; he has been pursuing this freedom his entire life. His only successful flight carries him to his death.

The Art of Flying is one man’s story, but it is also the story of the Spanish civil war, the devastation brought upon the individual by war, and the pervasive power of loneliness. Altarriba and Kim carry us through Antonio’s five-story fall and do very little to soften the impact.