The Festival of Insignificance by Milan Kundera 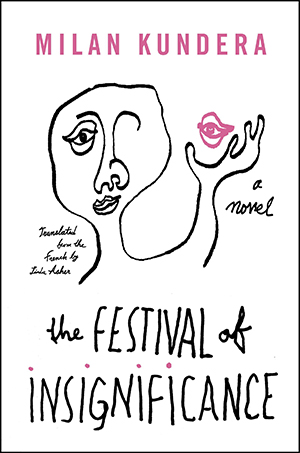 It has been thirteen years since Milan Kundera last published a novel. The Festival of Insignificance is Kundera’s tenth novel and the fourth to be written in French. Although The Festival of Insignificance is the shortest of his last four novels, its theme may be the broadest. It’s incredibly difficult to summarize the plot other than to say that it revolves around four men in contemporary Paris over the course of two days. The four men are at least in late middle age.

Like Kundera’s nonfiction, The Festival of Insignificance is divided into seven parts. Each part orbits the lives of Alain, Ramon, D’Ardelo, and Charles. There are various minor characters who make appearances as well as a strange subplot featuring Joseph Stalin. The novel begins in June with Alain contemplating the exposed navels he spots on various women he sees while strolling through Paris. What follows is a postmodern meditation on the insignificance of life and the fact that our navels are signs that fundamentally tie us to our mothers.

The existential dilemma Kundera explores is not as finely tuned as in his previous work but is nonetheless resonant here. What the characters come to realize is that the navel is an unambiguous sign of humanness. Our individuality, the particular individuality of identity, gives way to the general. As Kundera’s Alain exclaims: “The thighs, the breasts, the buttocks have a different shape on each woman. So those three golden sites are not only arousing, they also express a woman’s individuality. You could never mistake the buttocks of the woman you love. The beloved buttocks, you’d recognize them among a hundred others. But you could not identify the woman you love by her navel. All navels are alike.”

What may be most important about this novel is the fact that it further ties Kundera to the French language. In fact, I suggest that readers take Slowness, Identity, Ignorance, and The Festival of Insignificance as parts of one longer narrative that is decidedly French or, more accurately, explores the condition of the exile in France. With these novels we get snapshots of the European writer in exile and his perception of a post-Communist world. Because these novels can be read in one sitting, they are much more episodic and contemporary than Kundera’s earlier work.

The Festival of Insignificance is the weakest of Kundera’s French novels, but that does not mean that it is, forgive me, insignificant. Kundera is now in his eighties, and while this does not make him a lesser writer, we do have to alter our own perceptions of Kundera’s overall oeuvre. If he keeps writing in French—and there is no reason to suspect that he won’t—then like Beckett before him, we can firmly situate him in the orbit of a world literature that works to move nationality (and nationalism) to the background.