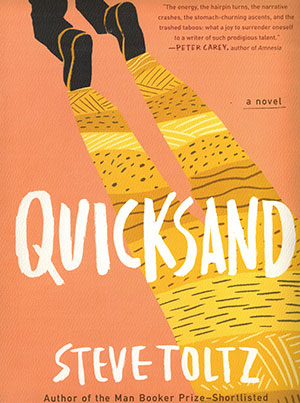 “Oh, plenty of hope, an infinite amount of hope—but not for us.”

This quote from Franz Kafka kicks off Australian Steve Toltz’s Quicksand—his second novel after the 2008 Man Booker shortlisted A Fraction of the Whole—and suggestively predicts the destinies of Aldo and Liam, two lifelong friends and Beckett-like characters that occupy the core of this story.

Aldo is a man who refuses to resort to any ordinary job but decides instead to make his fortune as an entrepreneur with endless unsuccessful ventures. His bad luck only gets worse after being erroneously charged with rape when he is still a virgin. From then on, he is constantly on trial—as his friend observes sharply, he is “not just the falling clown, but the falling clown who other falling clowns fall on.” Naturally, it is Liam who comes to his rescue whenever he is in trouble.

Liam is an incompetent cop whose own sad tale is eclipsed by that of his brilliantly inauspicious friend, and yet they have a lot in common. Both lose sisters during adolescence. Both suffer broken marriages—Liam’s wife is disdainful of his literary ambitions while Aldo’s once-adoring wife grows tired of all his bills, and both have not been changed by their life-changing experiences. Now their stories seem intertwined as Liam determines to write a new book based on Aldo’s life, to demonstrate “the pyrrhic victories of old friendships” and the belief that only art can lead to salvation—otherwise, how can people face this maddening, absurd, and disinterested modern world?

There is a burlesque of minor characters that abound within the book: Morrell, the art teacher whose book of banal aphorisms, Artist Within, Artist Without, becomes Liam’s bible to quote from as well as Aldo’s women: the singer-songwriter Stella, who uses Aldo as a tragic muse; Mimi, whose insanely jealous boyfriend, Elliot, happens to be Aldo’s inmate; and Leila, Aldo’s hapless mother who dies in penury after lending him money for another of his crazy schemes. Toltz keeps the center—Liam and Aldo’s friendship—strong and viable, and weaves their mishaps into a profound story of faith and friendship.