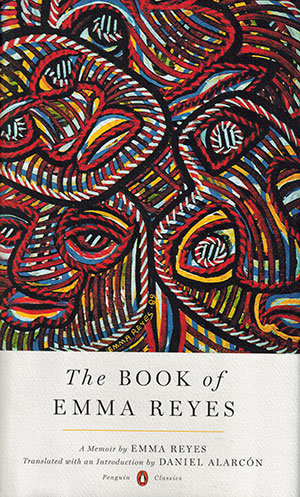 Emma Reyes’s letters written to the Colombian historian and critic Germán Arciniegas from the 1960s to the 1990s were discovered and published after her death in 2003. The most pivotal moments in Reyes’s narrative were at age five, when her abusive mother left her at a train station, and fourteen years later, at nineteen, when she stole the keys to the door of the convent that had imprisoned her and her sister and forced them into unpaid labor. Reyes considers and transforms this painful history of powerlessness and victimization in twenty-three arrestingly beautiful letters, written during her career as a painter in Europe.

When passers-by took the deserted child to a Catholic convent, she would not name her parents and refused to say where she was from. The fact that she did not know if she was baptized, whether “they were legitimate children or daughters of sin,” put her in a liminal space, allowed to work but not to take communion. Here, as before, she experienced loneliness and a lack of affection. She began in the kitchen, cleaning and carrying water. Every door had to be locked, every rule strictly followed, any infraction swiftly punished. “Every hour of every day was dedicated to a specific activity, predetermined and unchanging.” They woke at five and worked until sunset, subsisting on a cup of cold water, a piece of sugar cane, and a dark roll. Dinner was a bowl of clear porridge with vegetable stalks, a spoonful of rice, and a tiny piece of meat, accompanied by wormy potatoes and a green banana. She cleaned bathrooms and labored daily in each of four workshops: embroidery, tailoring, mending, and laundry. As her expertise in embroidery grew, she was chosen to make robes for the Pope.

Although she was illiterate until her late teens, Reyes’s simple prose unsentimentally and intuitively captures the poverty and trauma of her early life. Her painter’s eye for detail does the rest. We owe a great debt to the able translator, the novelist Daniel Alarcón, who has given an original voice the wider audience it deserves.