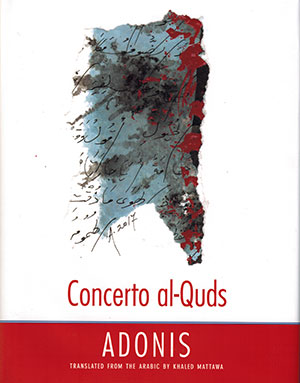 In his Concerto Al-Quds, Adonis immortalizes Jerusalem through juxtaposing the city to its past and present rulers, wars, streets, and religions that are deeply rooted in history. Adonis brings together Roman, Christian, Jewish, and Islamic histories and has them celebrate the marvelous Quds. The city is what always remains despite the fluctuation of politics and religions.

For Adonis, Al-Quds is an ever-extraordinary city where all the contradictions of life meet—life and death, beauty and malice, love and hatred, peace and war. It’s a “Sky on earth / Al-Quds, a dream language / a language that history bleeds into what came before it and after it / that mixes the human and the real / ending and non-ending.” Al-Quds is like no other city. It is the impossible that will always declare its immortality.

Adonis creates a vivid image of al-Quds and how instead of death representing the end of its inhabitants’ lives, it uses their bodies and graves for rejuvenation, as if death is the beginning of another life, parallel to that of the afterlife but this time on earth where “graves are the semen of al-Quds.” He utilizes creative images that leave the reader fascinated both with the beauty of al-Quds and the language that describes it, leaving a mythic illustration of this ancient city.

Adonis’s meticulous choice of language embodies recurring attempts to capture the smallest details of everything in al-Quds, such as the sky as he says, “What can I say? / No, there is no sky any more / No Sama’ / The Seen is a sword, the Mim mortality / the Alifs are an oppressive ancestry / The glottal stop a vast emptiness.” With deep thoughts and carefully chosen language, Adonis champions Al-Quds as the sole victor among its multiple rulers. His style employs a variety of concrete to abstract images, old and new histories, divine and human, nature and the supernatural—all are proudly part of the city. He smoothly takes the reader from the depths of history to the geography around the city, putting Al-Quds at the center of every aspect of life, life on earth and the hereafter.